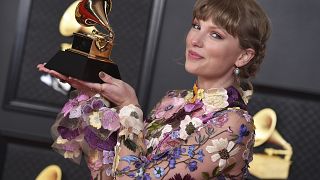 Taylor Swift poses in the press room with the award for album of the year for "Folklore" at the 63rd annual Grammy Awards in 2021.   -   Copyright  Jordan Strauss/Jordan Strauss/Invision/AP
By Jonny Walfisz  with AP  •  Updated: 01/11/2022

Taylor Swift has made history by landing a perfect 10 in the charts after the release of her tenth studio album ‘Midnights’.

After Swift released Midnights on 21 October, the top 10 positions on the US Billboard Music charts are all taken up by songs from the album.

It’s a feat that’s never been achieved before in US chart history. The person to come closest was Drake, with nine of the top 10 spots in September 2021.

The number one spot was taken by ‘Anti-Hero’. The song has immediately gained traction online with the lyrics “It's me/hi/I'm the problem/It's me” popping up on multiple TikTok videos.

Following Anti-Hero is: ‘Lavender Haze’, ‘Maroon’, ‘Snow on the Beach’, and ‘Midnight Rain’.

The impressive feat for Swift comes off the back of her album shifting over a million units in a single week.

Given that people were saying the days of any artist shifting a million units in their first week was considered a thing of the past, that’s mighty impressive.

Even Beyoncé couldn’t manage that with her newest album released earlier this year. The closest of the megastars to attempt the feat was Adele’s triumphant return with ‘30’ that shifted 839,000 equivalent album units in its first week of release in 2021.

Midnights has been breaking records left, right, and centre. On its first day, the album broke a global Spotify record for most streams.

In the UK, Swift is also making waves. She is now the female artist with the second most UK number one albums, only behind Madonna.

Midnights has shot to the top of the charts in Ireland, Germany and Spain. It’s also had her best opening for France and Italy where it placed fifth and forth respectively.

The 5 most daring and strange records broken around the world