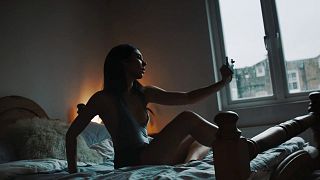 Euronews Culture continues its Halloween countdown with the penultimate horror short in our series.

Our seventh short of the series is MJ, by Jamie Delaney.

The dangers of technology and the anxiety-inducing ill of our time that is social media continues to fuel the imagination of filmmakers. From Ingrid Goes West to Sick of Myself via Not Okay, there’s no shortage of satirical and thought-provoking work that addresses the lengths to which people will go to in order get “likes” and to appear to be seen in today’s screen-obsessed world.

MJ deals with this subject and stands out with its portrayal of how social media has cleft reality in two, creating a distorted mirrored dynamic: the pressure of performative online existence vs. the reality far removed from vacantly dished-out morsels of approval.

Director Jamie Delaney collaborates with writer and lead actress Coral Amiga for this ingenious satirical thriller, which plays with the conventions of the slasher genre – chiefly the gender of the assailant.

The short deals with yearning for acceptance and purpose, as well as the feelings of inadequacy that decry from our digitally sclerosed lives.

Granted, the commentary never goes beyond the surface level that shows how being constantly logged-in allows alienation to thrive in a seemingly connected world. But to ask any more in the space of 13 minutes would be churlish, and MJ’s chillingly intimate atmospherics will stick with you long after the credits have rolled.

Join us tomorrow for the final horror short in our series...