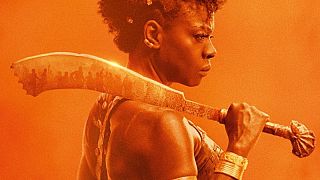 The Woman King   -   Copyright  Sony Pictures Releasing International
The opinions expressed in this article are those of the author and do not represent in any way the editorial position of Euronews.
By Tina Charisma  •  Updated: 29/10/2022

Brought to us by the Director of Love & Basketball and Beyond the Lights, Gina Prince-Bythewood’s Woman King is a story about the Agojie, who were a real-life group of women that protected the West African Kingdom of Dahomey (now in southern Benin) in the 19th century.

Starring Viola Davis as Nanisca, the general who maintains an all-female army of warriors fighting the slave-trading Oyo who have been attacking the villages of Dahomey, ruled by the new King Ghezo (John Boyega), who has deposed his brother in a coup.

For a film based on true events Woman King is not hinged to them. Nevertheless, the fictionalized characters fit well into the action-packed storyline captivating viewers.

Hollywood has had a genuine reckoning with Afro-centrism. Black Panther, Wakanda Forever and The Lion King are key examples of movies with black central characters set in an albeit fictionalised Africa. Studio directors now clearly seem to understand the box-office power of black movie goers. Woman King alone generated some $18 million in its US opening weekend while Black Panther overall takings passed more than a billion dollars within the first few weeks of its release.

The cashflow is no doubt the most convincing argument for the powers that allow movies to be made. But for people like me, who've spent a lifetime watching films that perpetuated patriarchy, erased black women, and subverted their strength on screens. I could not be prouder. I am here for this!

To rise against, their opposition, the Kingdom of Oyo’s new female recruits are tested to see the depth of their commitment through a series of boot camp contests fit only for an Agojie. As well as discipline to swear off marriage and motherhood focused solely on defending the kingdom of Dahomey. Nawi, (played by Thuso Mbedu, the South African star of The Underground Railroad) rises up to the challenge. She is dropped off at the palace like an offering by her frustrated father whose fury reaches its peak after Nawi’s refusal to marry several suitors. Welcomed by Izogie (Lashana Lynch) and Amenza (Sheila Atim) she is stewarded through the palace walking into her future as a warrior.

Woman King beautifully captures an African feminist premise rooted in the empowerment of women. Many people like myself never imagined the day when Hollywood would tell all stories, including that of African women, from perspectives of empowerment and upliftment rather than demise and subjugation. Creating a world that quite frankly should be seen by everyone. The film captures nuances seldom depicted on screens.

Gina Prince-Bythewood’s fight to get stories like this told is commended, serving as a valid reason for why black women need to be in rooms that help articulate complex stories that are nuanced in nature amplifying herstory and experiences. She doesn’t shy away from topics that many slavery movies evade, such as black people’s involvement in the trans-Atlantic slave trade.

The complexities rooted in this narrative and historical correctness of the storyline are inaccurate because Dahomey did in fact participate in the trans-Atlantic slave trade despite Nanisca wanting it to end. That does not mean Dahomey’s story needs to be buried.

Actors like Lashana Lynch have spoken highly of Prince-Bythewood. In a recent interview with Variety she said: “I enjoyed not having to have a conversation about my natural hair this time. It is nice to have a director who you have a shorthand with, another black woman - those conversation do not need to be had with any department because the leader has already had them for you. Your blackness, your womanhood, your energy as a black woman is already settled.” Can black women lead a global box-office sensation? It should have never been questioned in the first place.

I cried, as the film started drawing to end with the lights being turned on, I fumbled for my tissues to wipe the tears across my face. It was that film I did not know I needed to see.

For many average film goers, The Woman King, is not going to be a tear-jerker. Yet it touches on generations of strength and bravery of black women, many of whom never got their flowers. The ending in particular when Nanisca reveals being the biological mother of Nawi will certainly resonate deeply with black mothers and daughters across generations. Especially in light of continuing battles for reward and recognition. The struggle of motherhood for all women, black women in particular, has come at the dual challenge of battling patriarchy as well as prejudice simultaneously.

It makes sense while some critics have derided the film, especially over its historical inaccuracies, when the very world the film is trying to portray frees the narrative from all its demeaning social-political ties, and for once celebrates the bravery of African women. For racist bigots, this will take some getting used to.

The Woman King defies the white-washed expectations of Hollywood and shows the world what black woman are capable of. Normalizing what for so long seemed far off.

Black History Month: why isn't it celebrated more across Europe?

A guide and brief history of the Notting Hill Carnival