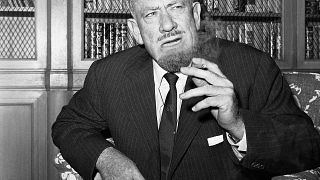 A new essay by the American writer John Steinbeck has been released in English for the first time, since it was first printed nearly 70 years ago.

Steinbeck is the author of American classics ‘Of Mice and Men’, ‘The Grapes of Wrath’ and ‘East of Eden’. He won the Nobel Prize for Literature in 1962 and is considered part of the American canon, with many of his works taught in schools around the world today.

His essay, ‘What About McCarthyism?’ was published in 1954 in French in the newspaper Le Figaro.

It has gone relatively unseen in the years since. Until now, as it is republished for the first time in English for the literary quarterly The Strand Magazine.

When Steinbeck wrote the essay, America was at the height of the Red Scare. Senator Joseph McCarthy led a committee that blacklisted everyone and anyone he could pin an association to the communist movement.

McCarthyism struck fear into anyone in the public eye as accusations could be levelled at anyone deemed untoward by the state, from government employees to actors and writers.

Steinbeck was living in Paris at the time. It was a short period of his life away from his native California, but it gave him the remove to look at what was going on in his home country.

He called McCarthyism “simply a new name for something that has existed from the moment when popular government emerged.”

“It is the attempt to substitute government by men for government by law," Steinbeck continued in the essay. “We have always had this latent thing. All democracies have it. It cannot be wiped out because, by destroying it, democracy would destroy itself.”

Steinbeck was always optimistic about the role of democracy in the United States, something he wrote about passionately in his sweeping novels.

He feared McCarthyism was an anti-democratic process of using public fear to reduce people’s freedoms.

“In resisting, we keep our democracy hard and tough and alive, its machinery intact. An organism untested soon goes flabby and weak,” he wrote.

The choice to republish this essay for the first time in The Strand, a magazine that has unearthed unpublished works by Ernest Hemingway and F. Scott Fitzgerald, highlights the dangers of similar strains of thought in American politics today.

McCarthyism would quickly die out as McCarthy was censured in the mid-50s and then died months later in 1957.

But in the US today, many argue the lies that surround Donald Trump’s faction of the Republican Party are a modern equivalent to the false accusations of the McCarthy era.

“Trumpism has not been clearly defeated but has instead helped to normalise anti-democratic behaviour that was previously considered out of bounds,” says Lucan Way, professor of political science at University of Toronto.

In just over a week, Americans will go to the polls for the 2022 midterm elections. This is the first major election since Trump and the Republicans’ defeat in the 2020 election that saw Joe Biden elected president.