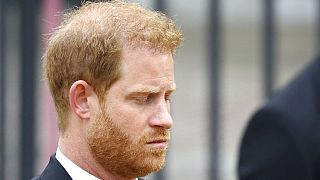 Billed as a "warts and all" account of his life - the eagerly awaited memoir of Prince Harry will be published next year on 10 January.

According to the Duke of Sussex's publishers Penguin Random House the book, called "Spare", will be packed with "insight, revelation, self-examination, and hard-won wisdom about the eternal power of love over grief.”

The book will be called “Spare” and is being billed by Penguin Random House as an account told with “raw, unflinching honesty."

In a statement released on Thursday, Penguin Random House drew on memories of the stunning 1997 death of Prince Harry's mother, Diana, and the subsequent image of Harry and his brother “walking behind their mother’s coffin as the world watched in sorrow and horror.”

“As Diana, Princess of Wales, was laid to rest, billions wondered what the princes must be thinking and feeling - and how their lives would play out from that point on,” the statement reads in part.

The book was widely expected to be released this autumn, but it's thought the publishers pushed back the date after the death of Queen Elizabeth II.  Within hours of Thursday's announcement, “Spare” was in the top 10 on Amazon.com's bestseller list.

“I’m writing this not as the prince I was born but as the man I have become,” he said. “I’ve worn many hats over the years, both literally and figuratively, and my hope is that in telling my story - the highs and lows, the mistakes, the lessons learned - I can help show that no matter where we come from, we have more in common than we think."

The memoir's title is an apparent reference to “the heir and the spare,” a phrase often used to describe royal siblings.

Harry's brother, William, is now Prince of Wales and heir to the British throne. When Harry was born, he was right behind William in the line of succession but has since been pushed down. Their father, King Charles III, assumed the throne upon Queen Elizabeth II's death in September.

The Duke of Sussex has already revealed much of his thoughts about his private life since his marriage to his American-born wife, Meghan, Duchess of Sussex.

The pair created a media storm in March 2021 when they chose to be interviewed by Oprah Winfrey and made many troubling allegations about life behind the scenes in Buckingham Palace. The couple spoke of Meghan’s deep unhappiness with her new life in England, the alleged racism within the royal family and Harry’s fear that his wife’s life might be endangered had they remained in his native country.

The interview came shortly after Harry and Meghan decided to retire from royal duties and move to America.

Harry told Winfrey that his family cut him off financially and that he helped pay for his security with money left to him by his mother. They have launched numerous initiatives, including a Netflix production deal and the nonprofit Archewell Foundation.

The 416-page book will be published in 16 languages, from Dutch to Portuguese. Harry himself - identified by Penguin Random House as “a husband, father, humanitarian, military veteran, mental wellness advocate, and environmentalist” - will narrate the audiobook.

Financial terms were not disclosed, but Harry, Duke of Sussex, will donate proceeds from “Spare” to British charities. He has already given $1.5 million to Sentebale, an organization he co-founded with Prince Seeiso of Lesotho to help children and young people in Lesotho and Botswana affected by HIV/AIDS.