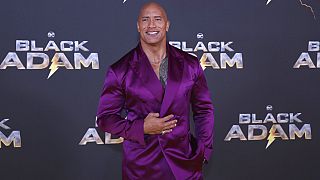 Warner Bros.' "Black Adam" opened with an estimated €67 million, according to studio estimates Sunday, handing Dwayne Johnson his biggest box-office weekend as a leading man and launching the D.C. Comics character he spent a decade to bring to the big screen.

“Black Adam” was a €200-million bid to upset the power balance in a DC Extended Universe dominated by the likes of Batman, Wonder Woman and Superman. The €67 million debut fell well shy of that stratosphere, even with the considerable draw of Johnson acting in his first superhero movie. Still, “Black Adam” managed the highest opening weekend since “Thor: Love and Thunder” debuted with €143 million in July.

“Black Adam,” which stars Johnson as an ancient Egyptian summoned to the modern day, was notably hobbled by poor reviews (40% fresh on Rotten Tomatoes). Moviegoers were kinder, giving the film a B+ CinemaScore. It collected €73 million internationally for a €140 million global haul.

“Black Adam” took a circuitous route to reach theaters. The character had originally been planned to launch as a villain in 2019's "Shazam!" before executives pivoted to give Black Adam a standalone feature. The goofier “Shazam!,” which cost closer to €100 million to make, opened with €53.5 million in ticket sales and wound up an over-achieving success with €366 million worldwide.

The stakes were higher for “Black Adam,” though. While promoting the film, Johnson hasn't been shy about his desire to follow up “Black Adam” with a showdown with Superman. But whether the receipts for “Black Adam” are enough to warrant that remains unclear. Under new leadership, Warner Bros. is overhauling its approach to DC Comics adaptations.

Jeff Goldstein, distribution chief for Warner Bros., celebrated the results as a personal best for Johnson outside of the “Fast & Furious” films, and a PG-13 film with broad-based appeal that audiences responded to better than critics. Still, it's a time of transition for Warner Bros.' reorganizing DC unit as the studio seeks more Marvel-sized successes. Next on tap is “Shazam! Fury of the Gods” in March.

“It’s all about making good movies. It’s all about finding the right scripts,” said Goldstein. "Our studio is definitely going through a major revamping of our production leadership and style and approach. I think that we’ll be able to crack this nut. We’re definitely focused in on doing that."

"Ticket to Paradise", the Bali-set romantic comedy starring Julia Roberts and George Clooney, proved smart counterprogramming. The Universal Pictures release debuted with €16.3 million, well above recent sales for rom-coms, which have struggled in recent years at the box office. The film is already a hit outside the United States, where it's been in release for the last month, accruing €80.2 million in ticket sales.

Earlier this month, Universal's R-rated “Bros,” an LGBTQ milestone in the genre, debuted with a disappointing $4.8 million. “Ticket to Paradise” had a notable advantage in its two stars, and appealed particularly to older audiences; 64% of ticket buyers were 35 and up, the studio said.

“It became an event film for all audiences this weekend but especially for older audiences that can be difficult to get into theaters,” said Jim Orr, head of distribution for Universal. “We all know this is a demographic group that doesn't exactly run out to see films opening weekend. That gives us great encouragement for the weeks and months ahead.”

Paul Dergarabedian, senior media analyst for data firm Comscore, noted it was the first weekend with a $65 million opener and more than $100 million in overall domestic ticket sales since July. That was owed largely to star power, he said, in the appeal of both “Ticket to Paradise" and “Black Adam” with Johnson.

“He was the engine that really drove this box office despite some headwinds in terms of the DC brand and this not being as known a character,” said Dergarabedian. “This is a very strong starting point for Dwayne Johnson in the mix of DC Comics. He's like a box-office supercharger. 40 percent Rotten Tomatoes, but people just want to see Dwayne Johnson on the big screen because he is bigger than life.”

Last week's top film, “Halloween Ends,” dropped massively in its second weekend. The Universal horror sequel, which was simultaneously released on Peacock, declined 80% with €8 million. Meanwhile, Paramount Pictures' “Smile,” continued to defy the typical declines for horror releases. With €8.4 million in its fourth week of release, “Smile” came in third and boosted its overall domestic sales to €84.3 million.

Estimated ticket sales for Friday through Sunday at U.S. and Canadian theaters, according to Comscore. Final US figures will be released Monday.