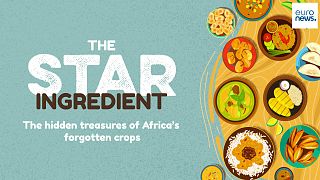 Fonio, sorghum, teff… Did you know that Africa has more indigenous grains than any other continent?

This information may come as a surprise, buried as it is under the stories we are perhaps more used to hearing about the continent’s struggles with malnourishment and food insecurity.

But in fact, Africa is a cornucopia full of nutritious, versatile and, frankly, delicious indigenous foods - ones that could each play a vital role in fostering more resilient food systems on the continent.

In an increasingly fractured world, where supply shocks and events like the war in Ukraine disrupt wheat imports and threaten the smooth functioning of our global food system, these local treasures are key for communities to thrive.

Discover “The Star Ingredient”, a documentary cooking show hosted by Euronews journalist, Tokunbo Salako, that will take you on a culinary tour across Africa and Europe.

There we’ll meet the chefs and local communities on a mission to recover and revive these indigenous ingredients.

Listen to all The Star Ingredient episodes

1 - Cooking with fonio, the ‘miracle grain’ that aspires to become Africa's quinoa

Halfway between couscous and quinoa, fonio is Africa's oldest cultivated grain. It matures quickly in one of the poorest and driest soils on the planet. It's also gluten-free and extremely nutritious. So why doesn't it sound familiar? Why has it fallen into oblivion?

In this episode, award-winning Senegalese chef, Pierre Thiam, shares two of his favourite fonio recipes with us and tells us why he has made it his life's mission to make the world fall in love with this “miracle grain."

Bambara Groundnut is something of a superstar amongst relegated African crops. Known as a ‘complete food’, it’s versatile, hardy in marginal soils and highly resistant to adverse climate conditions.

In this episode, we’re travelling to Nigeria to meet two women determined to put this overlooked bean on top of the menu, at home and around the world.

“Many people think African agriculture, the traditional systems, are backward or primitive, but these are the systems which are feeding people in Africa”.

These are the words of Edie Mukiibi, a farmer, agronomist and activist from Uganda and our guest for the third episode of The Star Ingredient podcast.

Edie, who is in his early 30s, represents a new generation of energetic thinkers in the food system. In this episode, Edie will recount the path his life has taken - from growing up on a humble farm in rural Uganda to leading a global food justice movement active in 160 countries.

In this episode, we’re travelling to the remote Burundian village of Ruhagarika to meet Jeanne Cimpaye, a woman who discovered sorghum at a refugee camp in a foreign land and used this forgotten ancestral grain to thrive during the most difficult times of her life.

Jeanne will also share her recipe of the traditional Burundian beers ikiyama and impeke.

Our new show will take you inside the home of renowned chef, Pierre Thiam, to cook with fonio, the ‘West African miracle grain’.

From there, we will navigate the teeming bustle of a Lagos food market with Nigeria’s budding culinary star, chef Moyo Odunfa. She’ll be hunting for the best bambara groundnuts and talking up her mission to put Nigerian food on the haute cuisine map.

And that is not all! Along the way we will travel to rural Burundi, to share a meal with the communities that venerate sorghum, a nutrient dense, gluten-free grain that could easily rival quinoa.

We’ll follow chef Ska Moteane as she journeys through Lesotho, continuing her life’s work sourcing and recording her country’s traditional recipes that are in danger of being lost.

Taking a detour to Europe, we’ll trek through the forests of Italy with chef Eleonora Matarrese, to explore how foraging can play its part in more resilient food systems.

These are just some of the personalities and foodies that will accompany you as we take a close and mouth-watering look at food; the red thread connecting not only our health and survival, but connecting us also to our culture, our habits, and our identity.

And if that’s not enough? Each episode will arm you with a unique recipe featuring one of our chosen star ingredients, so you can join in the fun, pull out the pots and pans, and whip up a show-stopper meal when you’re done listening.

Subscribe to The Star Ingredient on your favourite podcast app or find it on euronews.com or africanews.com from October 28.

This project was funded by the European Journalism Centre, through the Solutions Journalism Accelerator. This fund is supported by the Bill & Melinda Gates Foundation.

Interview with Edie Mukiibi, the new president of Slow Food

Cooking with Bambara Groundnut, a ‘food for the future’