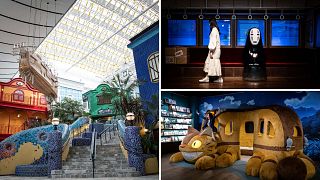 A highly anticipated theme park from Studio Ghibli, the creators of beloved films such as My Neighbour Totoro and the Oscar-winning Spirited Away, is opening its doors to visitors on 1 November.

Beyond the gates, a whimsical world awaits, complete with a fluffy Cat Bus, the toothy grin of Totoro and a life-sized No-Face seated on a train.

Located in Nagakute, Japan, within the Expo 2005 Aichi Commemorative Park, the attraction is divided into five areas: the Hill of Youth, Ghibli’s Grand Warehouse, Mononoke’s Village, Valley of Witches and Dondoko Forest.

The park, which was built at a cost of 34 billion yen (€240 million), features large open-air areas in keeping with the importance of nature and the outdoors in Studio Ghibli's films.

Only three sections of the theme park will be open to the public initially: the Hill of Youth, Ghibli's Grand Warehouse and the Dondoko Forest.

Let's take a closer look at these areas:

The Hill of Youth

This section serves as the entrance to the park and features an elevator tower inspired by several Ghibli films, including Castle in the Sky and Howl's Moving Castle.

Ghibli enthusiasts will also be able to explore a real-life version of the antique shop depicted in Whisper of the Heart, featuring a stunning view over the entire park.

Visitors can also take a look inside a faithful real-life scale recreation of Satsuma and Mei's House, which has stood in the park since 2005 for the Aich Expo.

A major draw of the park will be Ghibli's Grand Warehouse, the hangar-like indoor portion of the park with various attractions, including 14 sets from 13 Ghibli classics.

Visitors can stroll along an alley designed to look like the opening scene of Spirited Away, or perch on the red velvet-covered train seat in a carriage next to the movie's instantly recognisable "No-Face" character.

Mononoke’s Village and the Valley of Witches will open to the public at a later date.

This French Alpine town will screen 500 animation films this weekend