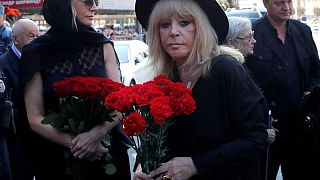 Alla Pugacheva, dubbed the ‘Queen of Soviet pop music’, has said she was in Israel, three weeks after she denounced President Vladimir Putin's war in Ukraine for turning Russia into a global pariah.

"I thank my multi-million army of fans for their love and support, for the ability to distinguish truth from lies," Pugacheva, 73, a Soviet and then post-Soviet icon who is probably Russia's most famous woman, said on Instagram.

Pugacheva is known across Russian generations for hits such as the 1982 song 'Million Scarlet Roses' and the 1978 film The Woman Who Sings.

Pugacheva said last month that the war was killing soldiers for illusory aims and burdening ordinary people She has in the past been feted by both Putin and his predecessor as president, Boris Yeltsin. When Mikhail Gorbachev died in August, she praised the last Soviet leader for allowing freedom and rejecting violence.