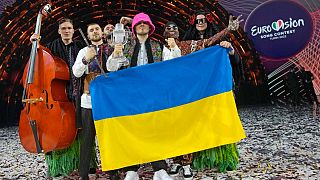 The English city of Liverpool will stage the 2023 Eurovision Song Contest, the BBC has said.

It comes after Britain was asked to hold the event on behalf of designated host country Ukraine.

Presenter Graham Norton revealed the winner on television, saying the final would take place on 13 May.

The BBC said earlier in the week that the competition would be held either in Liverpool or in Glasgow.

Scotland’s biggest city and the birthplace of The Beatles were named the two finalists from a shortlist of seven UK cities.

Ukraine won the right to host the glitzy pan-continental music competition when its entry, folk-rap ensemble Kalush Orchestra, won this year’s contest in May. Britain’s Sam Ryder was second.

Organizers concluded it was too risky to stage the event in Ukraine because of Russia's war, so the 2023 contest went to Britain, which says the event will be a celebration of Ukrainian culture and creativity.

“We are determined to make the 2023 Eurovision Song Contest one that both reflects the winning position of Ukraine and is also an event that all of the UK can participate in,” Phil Harrold, chairman of the BBC’s host city selection committee, said in September before the winning city was chosen.

The contest was founded in 1956 to help unite a continent scarred by World War II.

It has since grown to include more than 40 countries, including non-European nations such as Israel and Australia.

The organisers strive to keep music and politics apart, and overtly political symbols and lyrics are banned.

However, global tensions have often imposed themselves on the contest. Russia was kicked out of the 2022 competition because of its invasion of Ukraine.

After its symbolic victory in Turin last May, Ukraine was denied the right to host the 67th edition of Eurovision in June by the European Broadcasting Union (EBU), which considered that the security conditions had not been met due to Russia's war.

An agreement was announced on 25 July by the EBU and the British government for the BBC to hold the competition in the second-placed UK, in a version that would feature the country still at war.

Twenty British cities had applied to host Eurovision on behalf of Ukraine. A shortlist of seven cities (Birmingham, Glasgow, Leeds, Liverpool, Manchester, Newcastle and Sheffield) was announced in August.