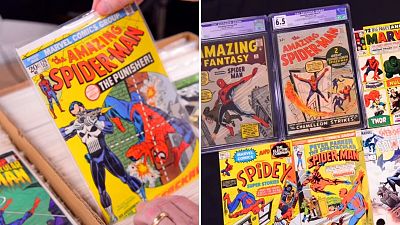 And with multiple $3 million (approx. €3.07million) sales for a single edition, the comic book industry is definitely no longer child's play.

Van Eaton Galleries are describing it as the largest and most extensive collection of Spider-Man comics ever offered for public sale.

The collector's shop have saved nearly every comic book ever produced with a Spider-Man appearance, including the first ever edition of "Amazing Fantasy #15" (1962), considered one of the most sought after items from the Silver age of comics from 1956 to 1969.

To register to bid or see a complete list of items, visit the Van Eaton Galleries site.

What is the most expensive comic ever sold?

The record sale for a comic book at a public auction belongs to Heritage Auctions, who sold a first edition Spider-Man "Amazing Fantasy #15" issue for $3.6 million (approx. €3.7 million) in 2021, beating the previous record held by a Superman comic.

Astonishingly, a single page of a Spider-Man comic book, which debuted the now-iconic black costume, fetched a $3.36 million at Heritage Auctions, breaking the record sale for a single page.

The most expensive comic book ever sold in a private sale is an 8.0 rated copy of 'Superman #1', Clark Kent's first self-titled series, for a humongous $5.3 million (approx. €5.4 million), dethroning Heritage Auctions' 2021 Spider-Man sale.