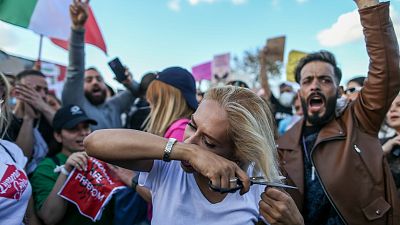 Iran has been shaken by more than two weeks of protests following the death of 22-year old Masha Amini on 16 September, after she was arrested by Iran’s morality police for allegedly not adhering to the Islamic Republic’s strict dress code.

She was detained in a “re-education center” and three days later died in hospital. The government has argued that Amini died of a "sudden heart attack", but her family said that she had no underlying health conditions and believe she was killed.

Since then, from the Middle East to Europe and the United States, demonstrators have marched to protest Amini’s death, rally against the country’s hijab laws, and show signs of solidarity with the female population of Iran.

The Iranian security forces have been mercilessly cracking down on protesters, with hundreds arrested and some human rights organizations saying that the death toll could be as high as the hundreds.

Yesterday (4 October), the body of 16-year old Nika Shakrami was added to the death toll, with many decrying her death as “a sign of the criminal rule of the Islamic Republic.” Shakrami was buried on her 17th birthday.

Women in Iran and all over the world have been burning headscarves, shouting “Women, life, freedom” and “No to the headscarf, no to the turban, yes to freedom and equality”. Some have also cut or shaved their hair in public.

Why are women being filmed slashing through their hair on camera?

For many Iranian women, hair is a sign of beauty that is decreed to be covered by a hijab in the Islamic Republic.

“Cutting ones hair is a meaningful form of protest,” says one Euronews journalist from the Persian team, who declined to give their name for fear of repercussions in their country and the security of their family in Iran.

“In the history of Iran, when women didn’t have enough power to stand up, they cut their hair,” the journalist continues. “It has always been a symbol of rebellion and to start a fight.”

Indeed, the cutting of hair is a symbol of protest and mourning, one that goes back to Ferdowsi’s Persian epic Shahnameh, one of the world’s longest epic poems written between c. 977 and 1010 CE.

It is the national epic of Iran, Afghanistan and Tajikistan, and chronicles the creation of the world and the Muslim conquest in the seventh century. Throughout Shahnameh, hair is seen as a recurring motif and is often torn or cut to signify mourning or loss.

Thousands of women across the world have been cutting their hair - a movement now spreading to celebrities, politicians and campaigners.

Yesterday, Swedish MEP Abir Al-Sahlani cut her hair in the European Parliament to show solidarity with anti-government protesters in Iran.

"Until Iran is free, our fury will be bigger than the oppressors. Until the women of Iran are free, we are going to stand with you", said Al-Sahlani as she cut off her ponytail in front of MEPs in Strasbourg.

In Paris, French MPs and ministers observed a minute of silence in the National Assembly, in "homage" to Iranians who have "paid with their lives for their fight for freedom".

"I would like to recall with you the memory of Mrs Mahsa Amini. It was on 16 September last in Iran", said Yaël Braun-Pivet, President of the National Assembly.

"She was brutally arrested in the name of supposed virtue for a single strand of hair that protruded from her veil and died. Since then, women, men and all the youth of Iran, whose incredible courage must be admired, have expressed their thirst for freedom."

Binoche who has appeared in The English Patient, Caché and Chocolat, was seen in video footage clipping off her hair and declaring: "For freedom."

On Instagram, it was accompanied by the message: “It is impossible not to denounce again and again this terrible repression. The dead are already numbered in the dozens, including children. The arrests only add to the number of prisoners already illegally detained and too often tortured. We have therefore decided to respond to the call by cutting off some of our strands of hair.”

The video of Cotillard, Binoche and dozens of other women cutting off locks of their hair was released on an Instagram account, "soutienfemmesiran" — which translates as "support women in Iran." The post has been widely relayed on other social media, including Facebook and Twitter.

“Iranian women expect support from the international community. This is a beautiful way to show that support,” French lawyer Richard Sedillot, who initiated the action, told Reuters news agency.

“This is only a first step, I hope that everybody in the world will follow, not only actresses but everyone. Men could also cut their hair; I think it will happen.”

Last week, Nazanin Zaghari-Ratcliffe cut her hair to show her support for the women of Iran.

The British-Iranian citizen, who spent six years in jail in Iran, recorded a video of herself taking a pair of scissors to her hair.

Speaking in Farsi, she lists the names of people, including Ms Amini, who have died in the protests. At the end of the clip, released by the BBC, she says: "For my mother, for my daughter, for the fear of solitary confinement, for the women of my country, for freedom."

In Italy, visitors to the MAXXI, the National Centre for Contemporary Art and Architecture in Rome, left hair in a transparent box at the reception, a box which will be delivered to the Iranian embassy in Rome.

“These initiatives are an important way for the international community to remember Iran. The biggest and most publicised reaction, the better,” says the Euronews Persian Team journalist. “I remember in 2019, about 1,500 people were killed during less than two weeks of protests, in one of the biggest crackdowns since the Islamic Revolution in 1979. At the time, few were reporting it and fewer now remember.”

“Actors can’t do anything more,” they continue, “but their actions are important.”

“It’s a good start and with this kind of support, governments will take notice and help Iran on a practical level.”

“Most vital of all is that the more people showing solidarity make the headlines, the more an international audience can establish a difference between Iranians and the Islamic Republic. Iranians and the younger generation do not accept the radical aspect of religion and the more coverage there is, the less chance of harmful amalgamation.”