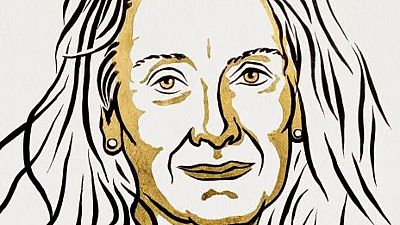 The French author Annie Ernaux has won this year's Nobel Prize in Literature.

The Swedish Academy said praised her “for the courage and clinical acuity with which she uncovers the roots, estrangements and collective restraints of personal memory”.

In her writing, Ernaux, 82, consistently and from different angles, examines a life marked by strong disparities regarding gender, language and class. Her path to authorship was long and arduous, the academy added.

The recipient is notoriously unpredictable and at times controversial.

Ernaux was chosen in a category that included literary giants from around the world: Kenyan writer Ngugi Wa Thiong’o, Japan’s Haruki Murakami, Norway’s Jon Fosse, Antigua-born Jamaica Kincaid, and one of the year’s clear contenders, Salman Rushdie, the India-born writer and free-speech advocate who spent years in hiding after Iran’s clerical rulers called for his death over his 1988 novel ‘The Satanic Verses.’ Rushdie, 75, was stabbed and seriously injured in August at a festival in New York state.

Last year's prize went to the Tanzanian-born, U.K.-based writer Abdulrazak Gurnah, whose novels explore the impact of migration on individuals and societies. Gurnah was only the sixth Nobel literature laureate born in Africa, and the prize has long faced criticism that it is too focused on European and North American writers. It is also male-dominated, with now just 17 women among its 119 laureates.

Why is Annie Ernaux the perfect choice for the Nobel Prize?

In a year in which the US Supreme Court overturned Roe v Wade and set society back by decades, the works of Annie Ernaux couldn’t be more timely or relevant.

Ernaux started out writing autobiographical novels, but quickly abandoned fiction in favour of memoirs. Her more than 20 books, most of them very short, chronicle events in her life and the lives of those around her. They present uncompromising portraits of sexual encounters, abortion, illness and the deaths of her parents.

“She has achieved something admirable and enduring,” he told reporters after the announcement in Stockholm, Sweden.

Ernaux describes her style as “flat writing” ("ecriture plate"), a very objective view of the events she is describing, unshaped by florid description or overwhelming emotions.

Her first book was published in 1974: 'Les Armoires Vides' ('Cleaned Out'). It is a fictionalised but bracing account of her illegal abortion ten years earlier. 'Cleaned Out' acknowledged the many working-class women who had to resort to clandestine, often life-threatening procedures before the laws were changed in France in 1975.

Most of the English-speaking world has woken up to her work thanks to recent translations of her books 'Les Années' (The Years' - 2008) and 'L'Événement' ('Happening' - 2000), which saw Ernaux return to the subject of illegal abortion.

Unlike in previous books, in 'Les Années', Ernaux writes about herself in the third person, calling her character “she” rather than “I”. The book received numerous awards and honors.

Her bestselling book, 'L'Événement', written in her signature raw style, pulls back the curtain on French abortion laws and the terrible consequences they entailed. In the book, she not only describes how she nearly died after finding a backstreet abortionist, but uses the topic of abortion to paint a picture of society’s attitudes towards working class women.

It has become a landmark piece of writing about abortion over the years and was adapted as a film, which won the Golden Lion in Venice in 2021.

The film L’Événement (Happening), directed by Audrey Diwan, perfectly translates Ernaux’s words onto the screen. Like the book, it focuses on a student’s determination to find a way to terminate her pregnancy in order to continue with her studies and her life: “I want a child one day, but not one instead of a life.” Set in 1963 when abortion was still illegal in France, both the book and the film depict a dreadful choice: those who seek a clandestine abortion risk it all if caught, as it was either a prison term or death.

Both the book and the film depict the realities of illegal abortions and never stumble into didacticism: they state that freedoms have been denied to women and that removing a person’s right to choose is tantamount to madness.