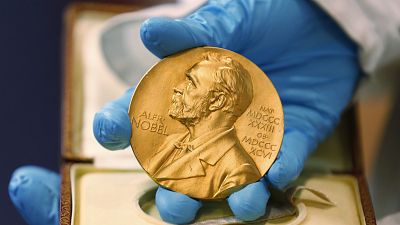 There are awards ceremonies where actors slap each other on stage and hosts make embarrassing winners mix-ups... And then there's the Nobel Prizes, very serious and rather pompous ceremonies that in our minds are as far from drama as a chemistry lab could be.

And yet, one of the Nobel Prizes has proven endlessly controversial: the Nobel Prize in Literature, which will be announced on Thursday this week (06 October).

The Nobel Prizes, first awarded in 1901, give scientists, experts and writers recognition for their groundbreaking, world-shattering and often life-changing research and work which is considered to have benefitted humankind greatly.

In most cases - let's say, for the prizes in medicine, physics, and chemistry - even if the choice of the expert or team of experts awarded could be considered controversial among those competing for the title, the general public would hardly be able to judge on the matter, seeing as these researches are often very technical and almost obscure to those who aren’t familiar with the subjects.

But when it comes to literature, chances are that a large number of people would have read the authors taken into consideration every year by the Swedish Academy for the prestigious awards. Even more so because the Nobel Prize isn’t awarded to individual books but to a writer’s body of work.

Here's a (redacted) list of the most spectacular and outrageous controversies surrounding the Nobel Prize in Literature, which is far from including all the debates these prizes have risen.

Possibly one of the most genuinely controversial literature awards was assigned to Austrian writer Peter Handke, a known denier of the Bosnian genocide during the war in the Balkans in the 1990s and a close supporter of former Serbia’s president Slobodan Milošević.

Hundreds of people protested outside of the ceremony in Sweden, and almost 60,000 signed a petition asking for the Swedish Academy to revoke the award. Most noticeably, the governments of Bosnia and Herzegovina, Kosovo and Turkey issued a formal condemnation against the award, while the ambassadors of Albania, Bosnia, Croatia, Kosovo, North Macedonia and Turkey boycotted the award ceremony.

When the Swedish Academy announced that the winner of the 2016 Nobel Prize in Literature was American singer-songwriter Bob Dylan, the public reacted with utter confusion: is Dylan even a novelist?

Dylan himself was silent in response to the announcement and didn’t show up to pick up the prize. Even though Dylan has written beautiful lyrics and poems and marked a revolutionary phase of American music, the impression is that he would have hardly wanted to claim the Nobel Prize in literature.

Even his fans were baffled by the Swedish Academy’s choice.

When you think of Vargas Llosa you think more of his political opinion than his book.

The Peruvian author, dubbed the "king of controversies", is certainly one of Latin America's most important novelists and essayists, and one of the greatest. But he’s also a writer who abandoned his initial commitment to socialism for right-wing politics, and ran to be elected Peru’s president in 1990. For many, his victory was a controversial choice by the Swedish Academy.

Before Leo DiCaprio became the object of several memes about being forever the Oscar nominee but never the winner (something that finally changed in 2016), there was another Leo who yearly got his hopes up to win a major prize in his field, but never actually did: Leo Tolstoy.

Rumours have it that the Swedish Academy never awarded Tolstoy because of the difficult and hostile history between Sweden and Russia. What’s certain is that Tolstoy died in 1910 without ever receiving this highly prestigious recognition.

This year's Nobel Prize in Literature

This year the names pushed forward for the Nobel prize are hardly controversial.

Among the favourites expected to win are beloved Japanese writer Haruki Murakami, Nigerian Chimamanda Ngozie Adichie and Indian-born British-American Salman Rushdie, who was recently the victim of a brutal knife attack at the hand of someone who had reportedly read only two pages of his novel "The Satanic Verses."

But even if the awards managed to stir away from controversies this year, many are wondering whether we still need the Nobel Prize in Literature at all.

Considering that this over-a-century-old institution has appeared to struggle to become more inclusive and keep up with times, should we still give it the same level of respect we have rewarded it with for decades?