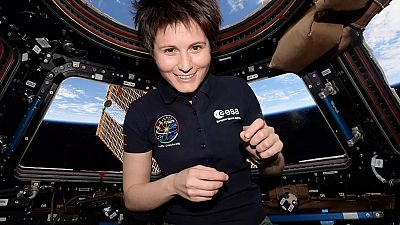 Samantha Cristoforetti in orbit around the Earth onboard the International Space Station.   -   Copyright  AP Photo   -
By Jonny Walfisz  with AP  •  Updated: 04/10/2022

Italian astronaut, Samantha Cristoforetti, has taken a Barbie doll with her on her trip to the International Space Station.

Cristoforetti is the first European female commander of the ISS and the Barbie was designed to look like her as part of a joint effort with the European Space Agency (ESA) to inspire the next generation of space travellers.

Mattel created a one-off doll resembling Cristoforetti in 2019, in honour of the astronaut. A version of the doll was released for sale in 2021 and that Barbie was taken on a zero gravity parabolic flight.

This is the first time a Barbie has reached space.

This week, Cristoforetti answered questions from girls who had taken part in a role model programme with the charity Inspiring Girls International.

It’s all quite sweet, isn’t it?

But is it chic?

Before you get your pitchforks out because we here at Euronews Culture are trying to dampen an altogether quite sweet moment, we did say it was sweet. It is. But, frankly, it’s a galaxy away from being chic.

Asteroid belts are about as chic as oversized belts. Get back in the 20th century where you belong.

Why does it matter, you may ask. Well, for a number of reasons.

Barbie is meant to be chic

Created in 1959, Barbie became the cultural icon she is in the 60s. She was a brand new doll on the market that young girls could look to aspirationally.

Barbie was beautiful by the beauty standards of the day and you could customise her clothing. But more than that, Barbie had a career. Starting off as a fashion designer, Barbie would quickly go on to have a whole host of jobs.

Styled like Jackie Kennedy, Barbie was an independent woman with a career and an optional boyfriend, Ken. In her first decade, she encapsulated so much of the 60s’ sexual revolution. Just like Barbie, women were freer to pursue their career and love interests to a greater extent than ever before.

Barbie was the original girl-boss icon. She was the plastic embodiment of chic. And we love her for that.

And while that lasted for some time, still retaining her chic-icon status throughout the 70s and the 80s, the glamour eventually wore off.

In 1968, Barbie introduced a friend, Christie. This new doll was one of the first black dolls available for kids and it was a huge step. But the idea that Barbie could be black herself wasn’t explored until the 80s, when a diverse range was created.

The result is that today, 40 years later, our cultural image of Barbie is still exclusively a tall white blonde woman with a waist that shouldn’t be able to physically support the torso of an adult human. An undiverse vision of womanhood that seems designed with the male gaze in mind isn’t exactly the 2022 version of feminism. And the girlboss qualities seem quite #hustleculture now you mention it.

The un-chicification of Barbie is evident even in the upcoming 2023 film starring Margot Robbie. Although not much is known of the film, it’s written and directed by Greta Gerwig and reportedly set in a dystopian setting, and is likely critical of the cultural space Barbie exists within.

The Barbie that Gerwig is interested in may be trendy, but from the stills we've seen, it's playing on themes of camp and kitsch, both of which are great. But they're not chic.

Which brings us up to the second side of the problem. How space became so unchic.

Space isn’t what it was

When Barbie was at her chic-est, shooting for the moon made sense. She was among the stars.

Now we’re all in the harrowing void of space.

Before I go on, I think it's important to note that I love space. As a child, it filled me with wonderment and to this day I still find the idea of exploring beyond the boundaries of Earth exciting. But just because I like it, that doesn't make it chic.

Space was about as chic as a thing could get in the 60s. The space race between the US and the USSR was a great distraction from the potential nuclear war that could start any moment.

And just as with Barbie and the sexual revolution, the 60s was a period of hopefulness and growth. Massive investment in space travel made sense. The world was heading toward the future with open arms.

Let’s just say attitudes in 2022 are a tad different.

For one, the glamour of the space race between the USSR and the US is gone. The narrative of the US as a bastion for the free world is pretty thoroughly eroded, while modern Russia is too busy trying (and failing) to ethnically cleanse Ukraine to be involved with something as chic as a space race.

Secondly, if you thought it was un-chic when you heard about the way celebs like Kendal Jenner and Taylor Swift use their private jets, I have bad news for you about space travel.

Space travel isn't exactly the top priority for the extinction rebellion lot, to put it simply. Until you can take a public transport bus to the ISS, it’s hardly going to be an environmentally conscious form of travel.

And third and finally, the chicness of a thing is defined by its adherents. So who likes space travel?

It’s not the chic ones. Instead, it’s the dweeby billionaire overlords we’re all exhausted with having to hear about.

Billionaires were only chic in the 90s when Donald Trump was weirdly a cultural icon still. And anything the desperate-for-attention Elon Musk does is de facto un-chic.

So, apologies to all. Barbie going to the ISS is sweet. But it ain’t chic.