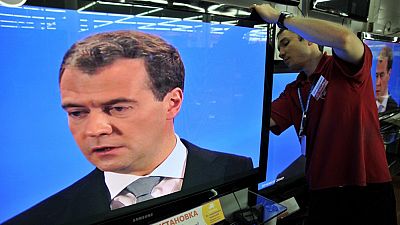 A Moscow shop assistant works on May 18, 2011, amidst TV screens during the broadcast of Russian President Dmitry Medvedev's televised news conference.   -   Copyright  ANDREY SMIRNOV/AFP   -
By Joshua Askew  with AFP  •  Updated: 04/10/2022

The entire southern Kherson region, which is largely under Moscow's control, has been connected to Russian television networks.

Some 1 million Kherson residents will now have free access to Russia's main TV channels, said the Russian Defence Ministry in a statement.

Widely-watched channels by the big state-owned Russian broadcaster VGTRK, such as Rossiya and RTR Planeta, are among those being aired.

"Specialists from Russian Armed Forces transmission units have connected and reconfigured to broadcast Russian channels the last of seven television transmitters in the Kherson region," said the Russian Defence Ministry.

Bordering the Crimean peninsula, which was annexed by Russia in 2014, the Kherson region was captured by the Russian army in the first days of Moscow's invasion of Ukraine, which began in February.

Moscow is pursuing a policy of "Russification" in the territories that it has captured in southern and eastern Ukraine. This has involved changing the currency to the Russian rouble, issuing Russian passports, and altering school curriculums.

Ukraine has also alleged that Russia is attempting to destroy the identity and historical memory of Ukrainian people - something Moscow denies.

On Tuesday, Kirill Stremoussov, a pro-Russian Kherson official, said the area could become part of Russia "before the end of the year."

"We are going to have a referendum this year," said Stremoussov, as quoted by the TASS Russian state news agency. "And at the end of this referendum, we will address the leaders of the Russian Federation so that they accept us within Russia."