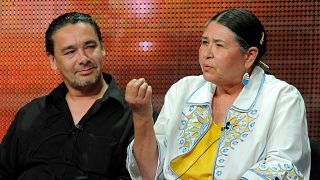 Sacheen Littlefeather, the Native American actress and activist who declined Marlon Brando’s Oscar for The Godfather on his behalf at the 1973 Academy Awards, has died at the age of 75. She had been suffering from breast cancer.

She was heckled by some members of the audience at the 1973 Academy Awards while explaining in her powerful statement why an absent Brando could not accept his best actor Oscar.

“He very regretfully cannot accept this very generous award,” Littlefeather said at the Academy Awards. “And the reasons for this being are the treatment of American Indians today by the film industry… and on television in movie re-runs, and also with recent happenings at Wounded Knee.”

At 26-years old, Littlefeather became the first Native American woman to ever take the stage at the Academy Awards, and was also threatened with arrest and physical assault.

Two instructions were given to her on the night: Brando asked her not to touch the Oscar statuette, and Oscars producer Howard Koch told her not to run over 60 seconds for her speech or she would be arrested by security. John Wayne, who was backstage at the time, was reportedly furious, with a number of witnesses describing how he needed to be restrained.

Though she had a few small roles in films, Littlefeather said she was blacklisted in Hollywood after the Oscars, and returned to San Francisco to continue her activism and work in theater and health care.

In June 2022, the Academy of Motion Pictures Arts and Sciences apologized to Littlefeather for her treatment at the Oscars that night.

Upon receiving the Academy’s apology, Littlefeather said: "Regarding the Academy's apology to me, we Indians are very patient people — it's only been 50 years!"

"We need to keep our sense of humor about this at all times. It's our method of survival," she continued.

Littlefeather attended an in-person presentation of the apology at the Academy Museum on 17 September.

"It is profoundly heartening to see how much has changed since I did not accept the Academy Award 50 years ago. I am so proud of each and every person who will appear on stage," she said.

In what was her final public appearance, the trailblazer spoke again on behalf of all Native peoples: “I am here accepting this apology, not only for me alone but as acknowledgment, knowing that it was not only for me, but for all of our nations that also need to hear and deserve this apology tonight. Look at our people. Look at each other and be proud that we stand as survivors, all of us. Please, when I’m gone, always be reminded that whenever you stand for your truth, you will be keeping my voice, and the voices of our nations, and our people, alive.”