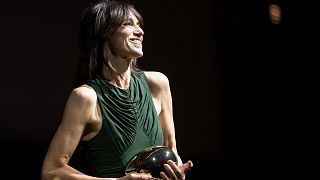 This week, we travel to Zurich's film festival with Charlotte Gainsbourg and Eddie Redmayne and stop at London's National Gallery to see the Lucian Freud exhibition and his hyper-realistic nude paintings.

In Paris, we head south of Ile Saint-Louis to the Institut du Monde Arabe to admire the unprecedented LGBT art of the Arab World.

And if you're walking down the Paseo de Recoletos in Madrid, finish your journey at the Fundación MAPFRE, which holds a Julio González and Pablo Picasso exhibition "the dematerialization of sculpture".

The Zurich Film Festival is one of the great autumn cinema events, and the biggest in Switzerland. It offers a rich selection of films from Europe and elsewhere as well as numerous previews and tributes in the presence of international stars such as Liam Neeson and Diane Kruger who both graced the "green" carpet this week.

And two European actors were awarded this year with a "Golden Eye", the French-English Charlotte Gainsbourg and Britain's Eddie Redmayne.

The event takes place at the Zurich Festival centre and ends this Sunday 2nd of October.

A major new exhibition has opened this week at the National Gallery in London featuring the work of European's best-known figurative painters, Lucian Freud (1922-2011).

The show aims to depict how Freud's painting evolved over 70 years.

Throughout his long career, Freud sought to get closer to his models, to pierce their intimacy through the pigments of his paint.

From highly prominent to low profile people, intimate or anonymous, clothed or naked; all his characters are without make-up under Freud's brush.

Habibi, the revolutions of love

In the French capital, L'Institut du Monde Arabe is presenting an exhibition which offers, for the first time, a journey through the queer culture of the Arab world,  shaken by gender issues.

A total of 23 artists (painters, photographers, visual artists and illustrators) from the Maghreb, the Mashreq, Iran and Afghanistan, as well as from the diaspora, make up the exhibition entitled "Habibi (my love), the revolutions of love".

Julio González, Pablo Picasso and the dematerialisation of sculpture

The exhibition "Julio González, Pablo Picasso and the dematerialisation of sculpture" deals with a joint work that has been considered by some art historians as the moment in which the "invention" of iron sculpture took place.

This is about two almost contemporary artists, whose personalities and trajectories are certainly different, but biographically parallel and culturally close.

The works that the artists produced together can be seen in the exhibition at the Fundación MAPFRE in Madrid until January 8th 2023.

Rendez-vous culture: The Best of Culture in Europe