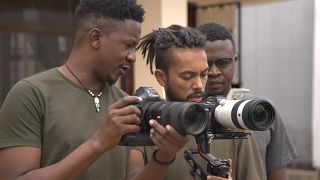 Some people have the potential to make a positive difference in their local area. Only a few can impact an entire continent. Twenty-four-year-old Jigar Ganatra of Tanzania is on a mission to do just that.

With a passion for filmmaking, Jigar aims to transform the image of Africa on the world stage from "the dark continent" – one dominated by narratives of poverty, famine, disease, violence and corruption - to a brighter and more colourful image showcasing incredible experiences.

"If we're going to change this image of Africa, it's not going to happen with one person, ten people, 100 people. It's going to happen if thousands of people are mobilising and telling the stories together," Jigar told Scenes.

Raised to be wild

Jigar was born and raised in the nature-friendly area of Mwanza in Tanzania, located south of Lake Victoria. "As I was growing up, I became accustomed to being surrounded by the wild and having a peaceful upbringing," he says.

Hailing from India, Jigar's parents relocated to Tanzania two years before he was born.

"I was fortunate that from a young age, I could go to international schools where I was exposed to teachers from all around the world and people from different backgrounds. So, I always had a worldview beyond Tanzania," he says.

At the age of 16, Jigar told his father that he wanted to study abroad. He visited the country of his ancestors, India, and then travelled to Malaysia. He attended universities in Canada and Mexico but ultimately decided to return to Tanzania.

"I felt I was on a path that would take me somewhere. I didn't know what the future had in store, but I just knew that I had to go and pursue a calling," Jigar continues.

Jigar specialises in documentaries that focus on the ecological perspectives of various world religions and cultures. With his friend Frank Papauska, Jigar co-founded AFRISOS.

Jigar recalls, "Frank and I were climbing Kilimanjaro. As we were climbing, we talked about our filmmaking careers and how we see the way forward. We realised that there is no film school in Tanzania that we know of. So, we were filling a gap".

According to Frank, the goal of AFRISOS is to empower other filmmakers. "As Africans, our voices are often left unheard. We depend on other people to come and tell our own stories, but by initiating this hub for filmmakers and storytellers, we can tell our stories as a continent."

"I feel they should come to Africa and see what I'm talking about because, at the end of the day, humanity started here," he says.

"Every single day, people ask to be volunteers. People are getting in touch with us on Instagram. They are interested in this idea because it has never been done before, but everyone has been thinking about it and talking about it. They are aware of everything we are doing," Jigar says.

The academy has a highly selective approach. Hundreds of applications for its mentorship programs are typically received, but only five applicants are selected. Dzivula Gube is a diver who works on a coral reef restoration project in Shimoni, Kenya. He got the chance to participate in the AFRISOS underwater filmmaking mentorship programme.

Gube plans to raise environmental awareness through films using his new knowledge and skills."It was an opportunity to fulfil my dream of becoming an underwater conservationist through filmmaking," says Gube. "Jigar and Frank taught me how to prepare a story for filming. Jigar also taught me about different camera settings and how to handle underwater camera housing. I'll use this experience in Mafia Island to continue working towards the conservation of marine ecosystems in Kenya."

Jigar's academy is primarily self-funded, but it hasn't stopped him from pursuing his passion. "I spent $23,000. I never thought I would ever spend that much, but that's why it is a major investment. Failure is not even an option. It simply isn't. I am ready to invest all I have in this project." Jigar told Scenes.

In collaboration with business partners, operational costs are covered. "Fortunately, we were able to secure the backing of some very cool companies for our debut appearance at the Wildlife Film Festival," Jigar says.

Through his academy, AFRISOS, Jigar hopes to open offices across Africa, revolutionise the film industry, and show the world the bright side of Africa.