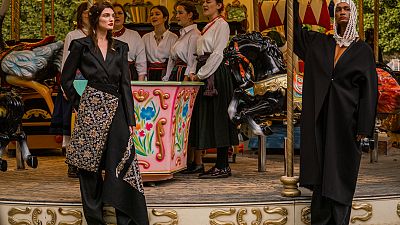 We all know what has been going on in Ukraine this year, the utter heartbreak and devastation of war. But this week in Paris, Ukrainian brand Litkovska showed the fashion world that in the midst of war the spirit of the nation and its creative pursuits are still hard at work to produce and inspire.

Set in the heart of the French capital at the Carrousel de Castiglione, in the Jardin des Tuileries, the brand’s creative director Lilia Litkovska, unveiled “Vesnianka.” The theme is a nod to traditional Ukrainian spring greeting songs.

Litkovska told Euronews Culture: “It’s totally inspired by my people, Ukrainians as a nation. The way yesterday’s businessmen and women, lawyers, workers at factories, nannies, beauty workers and the likes stood up for the defence at the start of full-scale war, to be honest, made me realize that Ukraine is not a small girl anymore but a young woman with defined desires."

"She respects herself and her boundaries with history and deep roots, hopes, and beliefs. This woman is fearlessly stepping into a new stage of her life, carrying the beauty inside and out, showing the character and that she has grown with the ambition she holds,” Litkovska added.

There’s something very hopeful about the sartorial story of this collection. It’s very much looking to tomorrow with the fears that have engulfed Ukraine, as a sort of past. Litkovska is clearly saying with spring comes new beginnings and a new dawn, so is Ukraine, and so is the world in these tough times.

On a large carousel, a quartet of women dressed in Ukrainian traditional clothing started singing a vesnianka. “Our ancestors used to sing these songs that honor the solar year, preparing for the work in the fields, asking superior powers for support in their beginnings,” shared Litkovska.

The silhouettes for the collection are modern yet edgy with shapely silhouettes, as according to the House is a refined arts-inspired chic brand at the intersection between sophisticated tailoring and daily comfort filled with allusions to traditional Ukrainian costume.

“Several pieces are decorated with an embroidery of a heartbreaking poem called “A Prayer of a Ukrainian Patriot’, which was initially written by a political dissident in his blood on the walls of his cell in the 1930s.

Now, this is a prayer of Azov, the brave Ukrainian heroes, who were blocked in the Azovstal plant and kept on fighting, being on the edge of human abilities. Now, every word of the 90-year-old prayer resonates in our hearts with pride and pain at the same time and remains relevant to nowadays.

But the collection is also about the future. I feel we are stepping into a new stage of life, ready for new beginnings while the past doesn’t burden us but gives us strength,” says Litkovska.

A loose fitted denim jumpsuit offers a chic edge and can be paired with heels. Layers are seen in many of the pieces. A white linen pants suit is layered with two tops and a matching jacket. And the textiles are light, airy, and pure. Litkovska and her team chose natural organic fabrics in the neutral colour palette ranging from innocent raw linen to strict and bold black pieces, which reflects the diversity of choices youth brings.

“You’ll also find a lot of very authentical elements in a modern interpretation, weaving ending in loose fringe that embody our experiences we lean on and give us wigs to reach new heights,” she shares.

“Since the collection is light and pure, the textiles correspond to the main message. We’ve chosen natural organic fabrics in the neutral colour palette ranging from innocent raw linen to strict and bold black pieces, which reflects the diversity of choices youth brings. You’ll also find a lot of very authentical elements in a modern interpretation, weaving ending in loose fringe that embody our experiences we lean on and give us wings to reach new heights,” she says.

“This collection is a pure reflection of how I feel about Ukraine now. It explores the beauty of life and its stages, celebrates rebirth, and praises a fearless step towards the new dawn, the new spring, a new world,” she states.

As the models ascended down the runway, each one stood on the side of the carousel. As the last model stood, the carousel began to turn for guests to see the full collection. Litkovska, carrying a Ukrainian flag ran out, and with tears flowing down her face she held up the blue and yellow flag, doing a lap around the carousel yelling out to guests “thank you.”

An emotional collection for Lilia Litkovska at an emotional time for Ukraine.