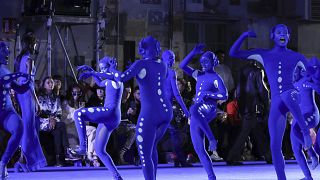 This week saw the second show Off-White has produced since the passing of its founder Virgil Abloh, who died of cancer last year.  Thursday would have been his 42nd birthday, and despite his death, his fingerprints were all over it.

Abloh was a part of the collection Ibrahim Kamara said in a recent Vogue interview.

Kamara was appointed Image and Art Director back in April by Off-White CEO Andrea Grilli to spearhead the creative side of things, and build upon what Abloh had started. And if this show is an example, then he's sure to succeed.

Themed “Celebration,” the House likened the collection to a laboratory where ideas collide and ignite conversations and thought. Wanting to handle Abloh’s legacy with care, as well as the path that he paved in culture, the House was left asking: “where do we go from here?”

“There are multiple doors with multiple possibilities. Under Ibrahim Kamara, our new Image and Art Director, we are eager to explore them all whilst continuing to create and challenge in the vein of Virgil,” shares the House in notes.

In this collection, Off-White is acknowledging the void of its founders’ death, but also, looking forward with a sort of joy of what is to come from this legacy.

Abloh gleaned from Holzer’s statements during the Black Lives Matter movement, and the 2016 refugee crisis. Disturbed by some governments and their negligence of human rights Abloh saw wisdom in her work.

Proceeds from the t-shirt sales will be given to Planned Parenthood, and guests to the show were given the shirt.

With a blue floor, a large white cube sat in the middle of the runway. On top musicians led the hyper intensive sounds. Video images reflected off the cube to start the show and then models descended.

The first look, all done in blue leather was a mini dress with circular cutout in the center spoke to the womb and Off-White’s response to women’s reproduction. The second look was leather pants matched with an oversized blazer with stitching artwork detail that gave the appearance of not quite being finished.

Puffer jackets with this incomplete look filled the collection.

Futuristic oversized coats offered a unique edge to the collection.

“A curious and youthful spirit fueled it from inception. Though a formally trained engineer and architect, Virgil willed his way into the fashion establishment and made room for his peers and collaborators,” recalls the House of Abloh.

It’s this sense of an outsider who entered fashion and took the industry by storm, paving the way for other artists to follow his path that Kamara now leads with. As Abloh rests in peace, it's somehow reassuring to think that Off-White will be just fine, creating fashion that speaks to the world, and that speaks up on the issues that matter to it and its base.