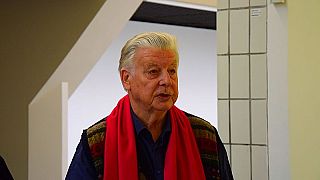 Jean-Michel Meurice, the renowned French painter and documentary filmmaker, has died at the age of 83.

Born in Lille in 1938, Meurice left behind him a series of stunning works. Using dazzling colours and contemporary materials - such as aerosols, vinyl, rhodoïd or aluminium - Meurice relentlessly tried to free himself from the constraints imposed by the brush, wall and frame.

"For me, painting is rock art, and the question is how to occupy the space and the walls," he explained to AFP in 2018 during an exhibition in Montpellier.

Passionate about cinema and painting from an early age, one of Meurice's first works was made in 1960 while he was a soldier in Algeria.

The work brought together his two passions: a painted strip of analogue film, with a motif composed only of the repetitive trace of fingers and brushes.

As the decades progressed into the 1980s and 1990s, Meurice developed a passion for Islamic art, after travelling Central Asia. Old motifs reappeared in his work in the form of large compositions of plant patterns with elegant arabesques such as his "Kaariye Walid", composed using the stencil technique with plane tree leaves.

In the following decade, he returned to drawing, depicting climbing plants, whose corollas were traced on synthetic shower curtains.

Leading the Supports and Surfaces movement, a scene with which he was regularly associated, Meurice always claimed to have pursued a "solitary search" in which fellow painter Pierre Soulages, whom he met in 1963, was "a godfather" and "support."

Alongside his career as a painter, he has produced more than 150 documentaries, particularly on painting, but also on the Algerian war of Independence (1954-62).

He also participated in the creation of the Franco-German television channel Arte.

This double work of the brush and the camera was distinguished by the Grand Prize of the Academy of Fine Arts for painting and by the National Grand Prize for Audiovisual Creation.