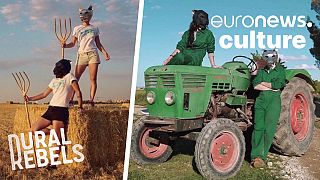 Carmina had always lived and worked in Spain's major cities: Barcelona and Madrid. But one day when she was travelling to a meat industry trade fair for her work in international trade, she realised something wasn’t right.

“I realised that I didn't want to be on that side of the picture, in an industry dominated by big animal farms and big corporations, which for me, represent the big monster of capitalism,” says Carmina. “I wanted to be on the opposite side, with the farmers, living a simple life.”

So when Carmina met Candela and the opportunity for a rural venture arose, she left her old life behind and found herself in the municipality of Albacete. Together they now run a farm that raises chickens for eggs and produces olives, almonds and lavender.

They also took on the challenge of converting everything to organic production.

“I came into land that luckily was already 50% organic but in the medium-long term, my aim is to change that remaining 50% from conventional to organic.”

Today, Carmina and Candela's farm, Los Paredazosis, is the only one in Albacete that has certified organic eggs. Their chickens are fed only with forage and cereals from organic farming.

"To tell you the truth, none of the other farmers and colleagues believes in our project,” admits Carmina. “They look at us with pity… ‘Poor girls, you have to get out of organic production as soon as possible. You won't get anywhere like this.'"

“They support us in any way they can, lending us machinery and so on, but they just don´t believe.”

Urban vs rural life: a collision of worlds

Carmina and Candela are not only organic farmers - they are also music lovers and DJs, known as L.A.S. DJs.

Part of their vision is to bring their two worlds together. One of the couple’s long-term plans is to organise a music festival on the farm.

“To bring people from the city so they can get to know this," Carmina explains, "To mix everything... I think that everything is compatible."

“Our ultimate goal is to make everybody dance like wild animals," she adds. “To make us forget about being static in the city and about all the posing that goes on there. Let yourself go with the music and let’s all be more natural.”

Find out more about Carmina and Candela's vision which combines organic farming, music and feminism by watching the video above.

The young Swiss farmers rethinking soil for the future of food