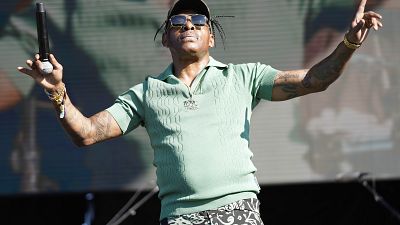 Coolio, the rapper who was among hip-hop's biggest names of the 1990s with hits including 'Gangsta's Paradise' and 'Fantastic Voyage', died yesterday, Wednesday 28 September, at age 59.

The cause was not immediately clear.

Coolio won a Grammy for best solo rap performance for 'Gangsta's Paradise', the 1995 hit from the soundtrack of the Michelle Pfeiffer film Dangerous Minds that sampled Stevie Wonder's 1976 song 'Pastime Paradise' and was played constantly on MTV.

Born Artis Leon Ivey Jr., in Monessen, Pennsylvania south of Pittsburgh, Coolio moved to Compton, California. He spent some time as a teen in Northern California, where his mother sent him because she felt the city was too dangerous.

He said in interviews that he started rapping at 15 and knew by 18 it was what he wanted to do with his life, but would go to community college and work as a volunteer firefighter and in airport security before devoting himself full-time to the hip-hop scene.

His career album sales totaled 4.8 million, with 978 million on-demand streams of his songs, according to Luminate. He would be nominated for six Grammys overall.

Coolio also had a successful career as an actor, appearing in dozens of films and popular television shows (often playing himself), including Batman & Robin, Get Over It, Daredevil and Futurama.

In recent years, Coolio developed a popular webisode cooking series Cookin’ with Coolio, and even auctioned his music rights in order to find his career as a chef. He wrote a cookbook of "gourmet ghetto" recipes, with ‘Crybaby Chicken’ and ‘Bro-Ghetti’ standing out as excellent takes on culinary classics.

Social media lit up with reactions to the unexpected death.

“This is sad news,” Ice Cube said on Twitter. “I witness first hand this man’s grind to the top of the industry. Rest In Peace, @Coolio."

“Weird Al” Yankovic tweeted “RIP Coolio” along with a picture of the two men hugging. Coolio had said in an interview at the time it was released that he wasn’t cool with Yankovic’s 1996 'Gangsta’s Paradise' parody, 'Amish Paradise'. But the two later made peace.

Michelle Pfeiffer posted on Instagram: “Heartbroken to hear of the passing of the gifted artist @coolio. A life cut entirely too short … I remember him being nothing but gracious. 30 years later I still get chills when I hear (Gangsta’s Paradise).”

Hillary Clinton described his passing as “a big loss”, while Chelsea Clinton stated that she was "definitely of the generation who grew up on 'Gangster's Paradise.'"

"I saw that just on Twitter on the way here and it just seems so improbably to me. He wasn't that old. He was such an icon. He continued to be so productive and I think that all of our thoughts and sympathies and prayers and solidarity have to be with his loved ones, his family and his friends in this moment," she continued.

Coolio was married to Josefa Salinas from 1996 to 2000. They had four children together.