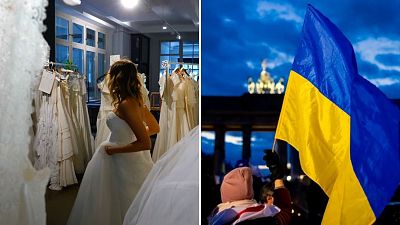 It's the dress your wear on "the best day of your life".

But after the big day, what do you do with your wedding dress? Do you keep it as a sentimental souvenir in the wardrobe? Banish it to the attic with the mice? Sell it? Hedge your bets and save it for next time?

A group of women in Germany have come up with the perfect solution.

They have set up a pop-up store in Berlin where women can donate their old wedding dresses, which are then sold to raise money for Ukraine. All proceeds from the new initiative, known as Dresses for Ukraine, go to organisations supporting women in the war-torn country.

It is the latest in a string of people-led projects across Europe that support Ukrainians through unconventional means.

Some are sending used bikes to Ukraine, others sell artworks to get funds, and some, in the UK city of Worcester, were recently told to stop donating pole dancing dresses and slippers with claws.

"Donate your used dress. Or come to the auction to find your future dress."

Dresses for Ukraine is the brainchild of Anna Saraste, a Finnish journalist living in Berlin.

Having already donated money to organisations supporting Ukraine, she came up with the idea this summer, believing more was to be done.

"I was going through my closet and sorting out different things and I came across my wedding dress once more. And that's when I decided, okay, this dress needs to go," Saraste says.

"I could sell that and give the money to Ukraine. That's great. And maybe I have some friends who also would like to sell the dresses. Let's do it together. And today, here we stand with 90 dresses."

For Saraste, it was not difficult or problematic to give away her wedding dress, often something that people cherish for its sentimental value.

"To be honest, it was not painful to let go of my dress," she says. "It had been taking up space in my closet for a long time and I really wanted to sell it, also still while it was in fashion. I had a beautiful wedding, I have beautiful memories, but I don't really relive them by putting on that dress. I mean, I wouldn't fit in that dress anymore either."

Most of the dresses at the pop-up store in the German capital have been donated by individuals, but some also came from wedding dress designers in the city.

Several dresses are auctioned, others are sold directly in the store in Berlin's trendy Kreuzberg district, while many are put up for sale online.

One person buying a dress is Berlin local Laura Benedetti, who is getting married next year in her hometown of Florence, Italy.

She came across an online ad for Dresses for Ukraine, shortly after starting her dress hunt.

"I just found it on Facebook," says Benedetti. "I thought it was a good thing to combine looking for a dress and also for a good reason, like spending for Ukraine."

A good cause, easily replicated

While those in Berlin are trying to sell as many dresses as possible, they also hope that people in other cities and countries will start their own groups.

"Well, one idea that we would definitely like to pass on from this action is that it could be easily replicated also in other places," says Saraste.

"There are a lot of women who have, for big money, gotten a wedding dress and who never do anything with it afterwards. And you could also collect these wedding dresses and auction them."

The project also involves some Ukrainian refugees who have fled the bombs and brutality in their country to Germany.

One of these people is Iryna Bielkina, a Business Administration masters graduate from Kyiv, who devotes some of her spare time to helping out by modelling the dresses.

"The thing is, wedding dresses usually cost a lot of money and if you are actually supposed to spend this kind of money, it is much better that they are for a good cause than for your wardrobe," she says.

All the money generated from sales of the special gowns is sent to two separate groups supporting women in Ukraine.

Since Russia invaded Ukraine on 24 February, around a million people have moved from Ukraine to Germany. Some 70,000 have decided to stay in the German capital.

"The first two months were, in psychological terms, a disaster," says Bielkina. "But then you learn how to live with it. And war is kind of your background - the wallpaper."

'If there is art, life goes on': Kyiv theatre company takes shelter