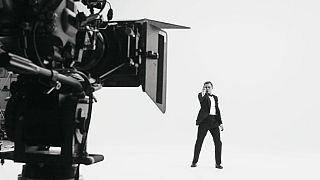 From an Aston Martin DB5 stunt car to costumes worn by Daniel Craig in his final Bond adventure No Time to Die, an array of James Bond props and iconic memorabilia are being offered at a charity auction this week as the film franchise celebrates 60 years.

The memorabilia is on display at Christie's Auction House in London for the Sixty Years of James Bond Charity Auctions. A live auction of 25 lots will be held Wednesday 28 September, and an online auction of 36 items is already underway and will close on 5 October - James Bond Day and the date of the world premiere for the first Bond film Dr. No, held in 1962.

The auction house hopes the sale will raise more than £3 million (approx. €3 365 000) with proceeds being split between 45 different charities.

"Everybody loves James Bond. Every one of us have grown up with James Bond to some extent. Everybody has that memory from childhood, from when you saw the repeated James Bond on TV, when you went to the opening of a new film. So it just resonates with everybody," says Adrian Hume-Sayer, Christie's Director and Head of Sale.

But the star item is the Aston Martin. Its future owner will need Goldfinger’s bullion reserve to afford it, as it's estimated at up to £2 million (approx. €2.2 million).

But Hume-Sayer says it's a very special car that's worthy of the price tag.

"So obviously the Aston Martin DB5, there's no other car that is quite so inextricably linked with James Bond. But that car particularly is an amazing creation," he says.

"There were a number produced for the film, but these stunt cars were produced in such a way that they would be capable of things that the original DB5 never would. So that's produced specifically for use on set. So it's not a road car, but it has the gadgets."

Michael G. Wilson, one half of the Bond producing duo with Barbara Broccoli, is in attendance. He started working on James Bond films in the 1970s, as both a producer and a scriptwriter.

"Well, there's no such thing as a favourite Bond to work on. They are all exceptional events and they all bring back great memories and memories of issues that we had, the problems we had. And so it's a mixture of feelings about it. When you see these props, that brings back a whole mixture of different kinds of feelings," he says.

No Time to Die was Daniel Craig's final outing as 007, and ever since the actor hung up the tuxedo and the Walther PPK, speculation has been rife about who will replace him, with stars like Idris Elba and Tom Hardy being mooted as the next MI6 spy.

When asked what the future holds for the series, specifically with regards to casting Daniel Craig’s replacement as the iconic spy, Wilson remained predictably tight-lipped.

James Bond has long battled Russian enemies, but after Russia's real-life invasion of Ukraine, Wilson thinks they may well choose a different path for 007's next nemesis.

"Well, sometimes we would like to be in a parallel universe, and hopefully by the time we get around to making the next Bond film, things will be resolved and the immediate problems we have. But there'll always be new ones to worry about," he says.

What do we know about the future 007?

Not much, is the thick and thin of it. It’ll be the best guarded secret until its announcement, probably towards the tail end of next year.

Still, while no decision has been made on who the next James Bond will be, fervent speculation regarding Craig's replacement continues and casting has been indirectly addressed by Bond producers Broccoli and Wilson.

They have revealed that James Bond 26 will be reinvention of the iconic franchise and have discussed the prospects of casting a new James Bond and how much of a commitment the role requires in an interview with Variety.

“When we cast Bond, it’s a 10-12 year commitment. So he’s probably thinking, ‘Do I really want that thing? Not everybody wants to do that. It was hard enough getting [Daniel Craig to do it],” says Broccoli.

They added that most young actors think they want to be Bond, but don’t fully grasp the commitment. “A lot of people think, Oh yeah, it’d be fun to do one,” says Broccoli. “Well, that ain’t gonna work.”

Wilson and Broccoli, who is a director of the U.K. chapter of women’s advocacy org Time’s Up, have attempted to humanize the womanizing spy, especially during the Craig era, and this will continue in the next films.

“It’s an evolution,” she says. “Bond is evolving just as men are evolving. I don’t know who’s evolving at a faster pace.”

So, we can expect a reinvention, a continuation of a more human Bond and a decade plus commitment that seemingly eliminates current potential suitors like Henry Cavill, Tom Hardy, Tom Hiddleston and Idris Elba, given their age and their likely desire not to be tied down to one franchise for the next decade.

The role will most likely go to someone in their 30s, which puts the likes of Game of Thrones' Kit Harrington (35), Bridgerton’s Jonathan Bailey (34) and Regé-Jean Page (34), Crazy Rich Asians' Henry Golding (35) and Eternals' Richard Madden (36) as far more likely candidates.