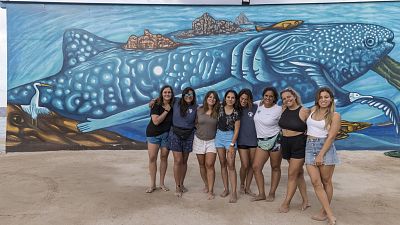 Orgcas have gained the trust of the fishing community in Agua Amarga and are helping to increase local shark populations   -   Copyright  Irene Barajas   -
By Nazneen Zahan  & Clayton Conn  •  Updated: 26/09/2022

Thousand of species of marine life inhabit Mexico's Baja California peninsula. This area has colonies of seals and shoals of stingrays and was home to one of the largest shark populations in the world. However, a significant decline in the number of sharks has been observed in the area in recent years due to harmful human activity.

A non-profit association established by thirteen local women is working to save these apex predators. "Orgcas is an organisation run by women with a shared interest in marine conservation. We come from a variety of different professions. We have biologists, pilots, cinematographers, photographers, ecologists, lawyers and many others," explains Porfirio Gomez, director of Orgcas.

The name, 'Orgcas,' is a play on the words, mixing 'organisation' and 'Orcas', an alternative word to describe a killer whale. Orgcas aim to preserve all species of marine life but are focusing their efforts on protecting sharks.

The importance of sharks

Sharks play an essential role in the ecosystem as they control their prey's distribution, abundance and diversity. They also indirectly support the growth of ocean plants by controlling populations of sea creatures that feed on them.

According to the World Wildlife Fund (WWF), there are over 500 species of shark worldwide. The IUCN Red List of Threatened Species states that over 143 of these species are in serious danger of extinction and are considered vulnerable to critically endangered.

There are many reasons for the decline in the number of sharks. Their habitat is under increasing threat from pollution and climate change. Some are caught accidentally. Many are caught deliberately for their fins, which some countries consider a delicacy.

"Seventy per cent of the shark population in Baja California is already gone. We already have locally extinct sharks such as the Great Hammerhead and the Oceanic White Tip Shark that are almost gone too," says Frida Lara, scientific coordinator at Orgcas. "If we don't do something now, it will be too late for shark populations to recover," she adds.

Shark fishing is legal in Mexico.

The method of shark fishing is legal in Mexico, and the country has occupied the top spot in the world in shark catching ever since the 1970s, according to the Intercultural Centre for the Study of Deserts and Oceans.

Orgcas are helping fishing communities transition from catching sharks to becoming tourist hubs for shark-related experiences. "The town we're working with is called Agua Amarga. It is a small fishing town with a population of 500 people," says Elena, director of development at Orgcas. "We are training them so that they can have an extra income and they can eventually phase out shark fishing," she adds.

There is no doubt that shark fishing is a challenging profession. Travelling to deep water to find sharks can be expensive and dangerous. So many local fishermen are willing to make a change in their careers.

"There is double the number of fishermen out there now. It is harder to fish because there are too many of us. But if we go with tourism, customers can go out and see one or two sharks, and they will be happy, and the ocean will be healthier," says Francisco Lucero Gerardo, a fisherman and member of Orgcas.

"If we can prove that this model is successful, I think we will start working with other fishing communities. I think Orgcas has huge potential to help people change their lives in many different ways," says Frida.

Orgcas have gained the trust of the fishing community in Agua Amarga and are helping to increase local shark populations. As a result, the organisation's ultimate ambition is to expand its model to cover the whole peninsula of Baja, California, in order to protect its ecosystems at large.