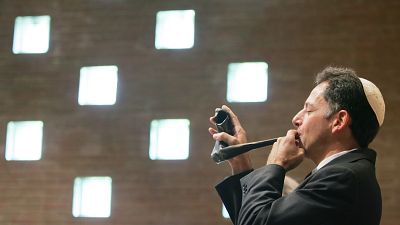 This Sunday night is Rosh Hashanah, or the Jewish New Year. Here’s everything you need to know about how Judaism celebrates its new year.

Rosh Hashanah, literally means “start of the year” and always takes place on the first two days of Tishrei, the first month of the Hebrew calendar.

What year is it?

Judaism has its own calendar that, unlike the solar Gregorian calendar most countries use, the Hebrew calendar is a lunisolar calendar. That means months are based around the phases of the moon, but also an extra month is added every two or three years to keep it in line with the solar calendar.

So the 1 Tishrei and the Jewish New Year starts on nightfall of Sunday 25 September this year.

The Hebrew calendar also puts its year 0 way earlier than the Gregorian calendar.

While the Gregorian calendar places year 0 as the year Jesus Christ was supposedly born, the Hebrew calendar’s year 0 is when 12th century Jewish philosopher Maimonides calculated the creation of the world.

By Maimonides’ calculations then, the new Jewish year will be 5783.

Suddenly, 2022 doesn’t seem so old. Although the Jewish calendar doesn’t exactly accomodate to there being events before it.

Rosh Hashanah is also not just one day long for many Jews.

As the day starts on the first of a new moon, in Biblical times it was only certified to be the new year when a witness had testified to a court they had seen the new moon. If the witness didn’t come forward, the day would be established retroactively.

In keeping with this tradition, many Jews still celebrate the first two days of Tishrei as Rosh Hashanah.

New Year Traditions - out with the out, in with the new

While for New Year’s Eve in New York, the famous ball drop happens in Times Square in Manhattan and fireworks go off in pretty much every major city, how do Jews celebrate Rosh Hashanah?

One of the most important traditions is blowing the shofar.

A shofar is a rams horn hollowed out to make a musical instrument. The blowing of the shofar symbolises a call to people to wake up and begin repentance. It’s also symbolic of the ram that was sacrificed in Isaac’s place in a famous biblical story.

On the subject of repentance, another tradition has Jews throwing their sins away, although not literally.

Tashlich is observed on the first day of Rosh Hashanah often by chucking small pieces of bread into a nearby body of water.

Both these traditions are part of the build up to another Jewish holiday, Yom Kippur that takes place just over a week later. On Yom Kippur, Jews atone for the sins of the past year to start the new year on a clean slate.

But what’s a new year celebration without a tasty treat?

For Rosh Hashanah, it’s tradition to celebrate a sweet new year with some sweet foods.

Apples are eaten with honey. And the bread traditionally eaten before a meal with a pinch of salt, is eaten with a dollop of honey as well. Lots of Jews also eat pomegranates over the festival.

In Ukraine, there’s also a longstanding tradition to make a pilgrimage to the city of Uman where Rebbe Nachman, who founded a movement within Judaism, is buried.

Despite the war, 4,000 Hasidim came to Uman to celebrate Rosh Hashanah.#RussiaUkraineWarpic.twitter.com/EnVsXi2eod

In 2020, president Volodymyr Zelenskyy made Rosh Hashanah a national holiday in Ukraine, the only country other than Israel to do so. Despite the war, 4,000 Hasidic Jews have still made the pilgrimage to Uman this year.

If you thought it was complicated enough that the Hebrew calendar has a different new year to the 1st of January, it’s not even the only new year the Jews observe.

The ecclesiastical new year is the date from which the months and Jewish festivals are counted. This year starts on the 1st of Nisan, which is next on 23 April 2023, starting the evening before.

Passover is the first festival of that year, starting on 15 Nisan, while Rosh Hashanah happens on the seventh month of the year.