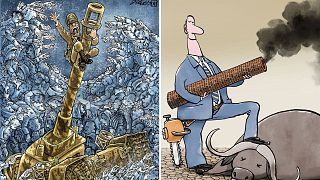 'Towards the end of Humanity' doesn't sound much like an invitation but it's a perfect starting point for this year's LIBEX international political satire cartoon competition.

LIBEX (short for LIBREXPRESSION) is a Euro-Mediterranean Centre, with the aim of defending freedom of expression, media and political satire, in an age of censorship and profit-oriented media moguls.

The organisation invited 281 of the world's best cartoonists from 63 countries to take part in their annual competition.

The material was examined by an international jury which narrowed down the entries to just 55 semi-finalist, whose work will be displayed in Italy at the cloister of the Monastery San Benedetto in Conversano.

Unsurprisingly, the war in Ukraine and the issue of climate change were the most common topics depicted in the art work this year.

Jitet Kustana from Indonesia scooped the top prize with his cartoon titled 'Sinking in the victims'.

The powerful hand drawn image depicts a soldier desperately clinging on to the end of a tank, as it sinks into an ocean made up of victims.

Second prize went to Cristina Sampaio from Portugal, for her cartoon titled 'War'.

Take a look at the three prize winning entries below:

What makes a great political cartoon?

We spoke with Thierry Vissol, the director of the LIBREXPRESSION Centre, about what makes a great cartoon.

He says there are three main factors to consider:

"First of all - technique. Good cartoonists must be able to express what they want to express in the right way, in the professional way," he said.

The second component of a good cartoon according to Vissol is the quality of information that the cartoonist is using and the way in which they analyse it.

"You must understand that a good cartoonist is a journalist. You have to be aware of what's going on, the various points of view and the consequences of this," Vissol explained.

Lastly, he emphasised the importance of irony and humour, in the democratising effect it can have.

"I think it's a profession which is in danger, in danger of disappearing."

Cartoons have long been used as a powerful tool of political speech.

However, as Vissol states, that also makes them a threat to those in power, "who are afraid to see these critiques through photos of through cartoons".

"Therefore, there is a censorship that is done by military, religions, economic and political powers, who are all afraid to see such strong images which are attracting attention and making people think," Vissol said.

As well as censorship from authoritarian powers, cartoonists are also contending with "market censorship" and the evolution of media, towards more oriented information.

"It's a very difficult situation for cartoonists because most of the media now are properties of rich people, who are not interested in the content. They are only interested in the revenues and producing oriented information," explains Vissol.

Ultimately, cartoonists have seen a shift in the editorial scope given to them and their numbers are dwindling.

The majority of political cartoonists are now inevitably using using social media to build their own presence.

"There is a real danger for democracy if you cannot see any more critiques through cartoons or through photography," concluded Vissol.