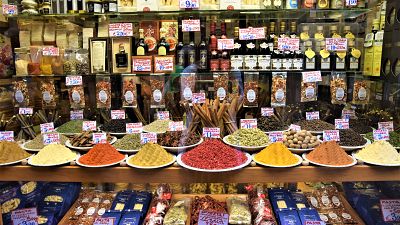 At Bistrot de Venise - a renowned restaurant in the famous canal city - one of the most popular dishes is cisame di pesse. It's a firm favourite with diners pairing prawns with sweet and sour onions and a pinch of bold orange turmeric.

It seems strangely at odds with the city's more usual hearty, Mediterranean cuisine, but Asian spices were once a staple of Venetian cooking. And restaurants in the city are now increasingly turning to these ingredients and recipes to keep the city's spicy historic cuisine alive.

Sergio Fragiacomo, the owner of Bistrot de Venise, has a passion for leafing through old recipe books. In his personal library, he keeps heavily annotated copies of cookbooks with dishes dating back centuries. One well-thumbed volume is a reprint of a 14th-century opus by an anonymous Venetian cook. Of the 135 recipes, Fragiacomo has tried at least 60 since he began delving into the history of this cuisine around twenty years ago..

But he admits recreating historic Venetian dishes is not easy. "I quickly realised the recipes are far too spicy for modern tastes," Fragiacomo says. "I've had to tone them down, but I try to stay as faithful to the original ingredients as possible."

The current menu offers dishes like Raffioli de herbe taken from the anonymous Venetian’s 14th-century book. Here ravioli are stuffed with sweet cheese and topped with a turmeric-spiced sauce and almond sugar wafers.

While some popular dishes, like the sweet and sour prawns, have become regular fixtures on the menu, Fragiacomo also likes to add new options. “I’ll choose a dish from one of my books and ask the chef to recreate it with his own interpretation if necessary,” he explains.

One example is umbrina fish baked in an almond crust with saffron fish stock, white peach coulis and basil. The dish is a reworking of a Renaissance recipe, taken from the 15th century Libro de Arte Coquinaria by Maestro Martino.

The vast array of spices that feature in Venice’s historic cuisine was a direct result of  the city’s powerful trade links with the East. As early as the 12th century, Venetian merchants understood the economic potential of the Asian spice trade.

By the medieval period, random travel to the region “gave way to a regular system of convoys known as the muda, or state-subsidised galleys auctioned out to the highest bidder,” writes historian Jack Turner.

“[Spices] were whisked across the sea in armed fleets carrying up to 300 metric tons of spice, defended by a contingent of marines, and sped on their way by banks of rowers, swift enough to outrun any pursuer.”

In Venice, cinnamon, saffron, ginger and pepper were some of the flavours that became an integral part of the city’s cuisine.

Even Venice’s topography is a reminder of the importance of selling spices. Ruga dei Spezieri is named after the spice merchants whose shops once lined the street. One vendor, Drogheria Mascari, still sells the products in exotically-coloured fragrant piles in the window.

As Venetian food historian Iris Loredana explains, these spices were not used to disguise the odour of rotting meat or fish as once believed. “Spices were used to enhance the flavour of fresh ingredients,” Loredana says, “as well as to give intense colour to the dish.They were also seen to have health-giving properties."

It was a sophisticated and expensive cuisine. "We only have recipes for the nobility or rulers of Venice in cookbooks," notes Fragiacomo, "because the food of the lower classes hasn't been recorded."

A decade ago, Loredana and her now 99-year-old grandmother began a website aiming to “cover the vast and unexplored culinary heritage of the Republic of Venice, ‘hiding’ in Venetian libraries.”

They trawled through books and documents in Greek and Latin from the 14th to 18th centuries in the San Zaccaria monastery library, owned by Loredana’s grandmother.

Recently, Loredana has witnessed a burgeoning interest in her website and cooking classes. “I think people are always trying to discover the secrets of Venice,” she says, “and now they have found a new path into the heart of the ancient city.”

Loredana has also noticed that contemporary restaurants in the city seem to be increasingly recalling Venice’s spicy historic cuisine in their menus.

Zanze XVI opened five years ago and was awarded a Michelin star last year. The interior combines a contemporary feel with the rustic atmosphere of the tavern that has existed here since the 17th century. Diners eat at tables made from recycled bricole, the wooden poles that mark sailing routes through the lagoon, and dine on Murano-made glass tableware.

The canal-side restaurant’s Taste of Venice menu aims to fuse past and present. Chef Nicola Dinato uses the city’s historic recipes and flavours reinterpreting them in his contemporary cuisine. His risotto di go, for example, is a rice dish using a typical lagoon fish. He adds flavours including kefir (fermented milk) and ginger.

Other dishes capture the heart of historic Venetian cooking. Spices feature in many of the dishes including the fresh 'catch of the day' with crab curry or the amuse bouche of coconut milk flavoured with turmeric and ginger.

“With a large proportion of tourists as clients, who may have just visited London or Tokyo or New York, I want to communicate Venice through my food,” says Dinato. He rejects the label 'fusion', preferring to see his food as a reinterpretation of a Venetian cuisine that was already fusing east and west centuries ago.

Spices now crop up in many gourmet restaurant menus in the city. Osteria da Riccardo serves gnocchi with scallops and saffron or octopus with smoked paprika while Luna Sentada prepares spaghetti with clams, tomatoes and ginger.

A golden moment for Venetian cuisine

Venice is often criticised for poor quality food options, but Dinato thinks change is in the air. “Venice has been missing these types of fine dining through affordable restaurants,” he says, “but over the last decade, they have been emerging in the city. Venice could become one of the most interesting gastronomic capitals.”

Loredana, too, feels Venice's may be experiencing a 'culinary' moment: "Visitors to Venice are here for its artistic and cultural heritage, and now they are discovering its great culinary past."