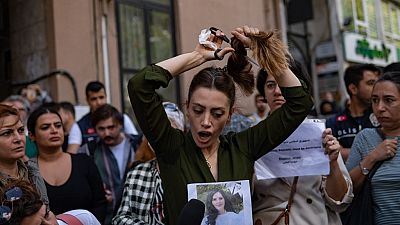 Nasibe Samsaei, an Iranian woman living in Turkey, cuts her ponytail off during a protest outside the Iranian consulate in Istanbul on September 21, 2022.   -   Copyright  YASIN AKGUL/AFP or licensors
By Joshua Askew  •  Updated: 25/09/2022

Iran is once again on fire.

There is widespread public anger over the death of Masha Amini after she was detained by the country's morality police.

While on a family trip to Tehran, the 22-year-old was arrested last Tuesday for "improper" hijab, an Islamic headscarf which Iranian women must wear by law.

Eyewitnesses and relatives accuse officers of severely beating the young Kurdish woman - striking her several times on the head. She later collapsed and was taken to hospital in a coma. On 16 September, three days later Amini died.

Iranian authorities claim she had a fatal heart attack. Her family says she was perfectly healthy.

The shocking incident has again put the spotlight on Islamic dress codes and police brutality in Iran.

But what is the significance of the hijab in Iranian society?

A (brief) history of the hijab in Iran

It was made compulsory for women to wear the hijab in Iran, following the 1979 Islamic Revolution.

The government draws on parts of the Quran (Islam’s holy book) and the Hadiths (sayings of the Prophet Mohammad) to justify the policy, though Muslim religious writing is not entirely clear on whether women should veil.

Islamic dress codes are strictly enforced by the country's morality police, who prowl the streets in vans detaining people who have "inappropriate" clothing. They are known as gasht-e ershad (guidance patrols).

Despite the threat of arrest, millions of Iranian women actively oppose the hijab, wearing it loosely around their heads and often letting the headscarf fall to their shoulders.

Resistance to the compulsory hijab was almost immediate. After Iranian Supreme Leader Ayatollah Khomeini said women should observe Islamic dress codes in 1979 there were fiery protests, leading the government to say his comments were only a recommendation. It became law in 1983.

Protests against the hijab have continued sporadically ever since, culminating in the women burning their headscarves and dancing we see today.

Before the revolution, when Iran was ruled by a secular king Mohammad Reza Pahlavi, many Iranian women actively wore the hijab. They did so for a variety of reasons, be it because of tradition, identity, religious expression or family pressure.

However, according to Iranian poet and journalist Asieh Amini, the main problem today is that women are forced to veil, pointing out they can be lashed or imprisoned for defying Islamic dress codes.

“Unfortunately, this has led many people to hate it,” she told Euronews Culture. “Women experience so much oppression. They can't stand this domination and want their rights."

"Police say they are there to advise," Amini added. "But, in reality, every single day, in all of Iran's cities, they are controlling women's bodies, their dress, everything."

"Hijab is a symbol of this oppression."

Amini - herself once arrested by the morality police - said the demonstrations currently rocking Iran are about much more than dress codes.

"The demands of people are not limited to the hijab," she said. "They want freedom. They want democracy. They want to be free of this Islamic Republic."

Mahsa Amini's death has unleashed pent-up fury over issues including personal freedoms in the Islamic Republic and an economy reeling from sanctions. Women have taken off their veils during four days of protests, with some cutting their hair in public.

According to one Iranian activist, who wished to remain anonymous, another issue with the current hijab policy is that does not respect the different forms of dress worn by Iran's various ethnic and religious groups.

Instead, the government tries to promote the black chador, a large piece of cloth, which leaves only the face exposed.

“The Islamic government is not even approving of the other types of hijab and traditional clothing in other ethnic groups,” she said. “They even oppress those people who are actually practising their religion.”

Iran is a very mixed society, containing Persians, Kurds, Azerbaijanis, Lurs, Gilakis, Arabs, Balochi and Turkmens. Each has its own traditional clothing and wears the hijab in different ways, switching colours, patterns and styles.

However, Amini was quick to point out that the hijab in Iran is not a cultural matter.

"Whenever we talk about women's dress code and their rights in Iran, the government always answers that this is Iranian culture," she said. "This is not culture, it is force."

“We need to talk about law, punishment, how many women have been arrested just because of their outfit, not culture," she said.

Like Amini, the unnamed Iranian activist pointed out the oppressive, involuntary nature of the hijab in Iran, claiming it was counter-productive.

“As a human being whenever you are forced to do something you always want to reject it,” they said. “It is human nature.”

“It's [the hijab] has been forced on us for so many years that we don't know who’s wearing it because of their choice or because they are forced to.”

Looking to the future, they said they were "trying to be hopeful."

“It is really hard to talk about hijab at the moment,” they said. This looks like one of the biggest feminist uprisings that has happened in Iran since the revolution. Both men and women are coming to the streets together to fight for change."

"By killing Mahsa they opened the gates of anger.”