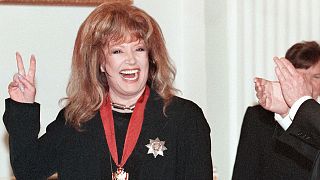 At 73-years-old, Alla Pugacheva, dubbed the ‘Queen of Soviet pop music’, is arguably one of Russia’s most famous singers with a successful career spanning over 55 years.

She rose to fame in the 1970s and remains widely popular throughout the former Soviet Union.

Although she no longer performs, she is an iconic figure for many Russians with 3.4 million Instagram followers and reported record sales of over 250 million.

Euronews’ Russian Service describe her as the ‘Soviet Edith Piaf’ and agree she is still an influential figure in Russia today.

She is perhaps best known to an international audience for her participation in the 1997 Eurovision Song contest with the song ‘Primadonna’, finishing in 15th place.

Keen music fans will also remember her 1982 hit ‘Million Scarlet Roses’ and her film debut in the 1978 musical ‘The Woman who Sings’ where she plays a famous pop singer who sacrifices her personal life for her career.

Pugacheva has been married five times most recently to singer and TV presenter Maxim Galkin.

Her repertoire includes over 500 songs in several languages including English, German, French and Ukrainian and she has collaborated with a number of famous songwriters such as Joe Dassin.

She is currently the Artistic Director and a host of her own TV show titled 'Fabrika Zvezd' (Factory of Stars).

The statement by Pugacheva on Instagram is a notable slap from a prominent figure at Russian authorities, who have stifled dissent in recent years.

She has met President Vladimir Putin several times but has never publicly supported him.

When Mikhail Gorbachev died, she praised the last Soviet leader for allowing freedom and rejecting violence.

In 2009 received the Order for Merit to the Fatherland from then president Dmitri Medvedev.