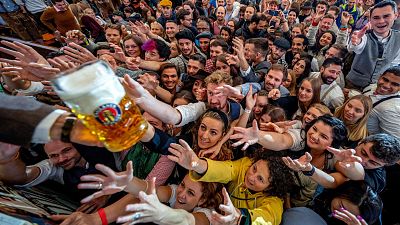 Oktoberfest, Germany's most famous (and booziest) folk festival is back, following a two-year hiatus due to the pandemic.

Every year the event attracts millions of visitors from across the globe, where attendees drink bicep-challenging steins of beer, eat plate-sized pretzels and dress in traditional Bavarian clothing.

This year's two-week long party began on 17 September and runs until 3 October.

Some 487 beer breweries, restaurants, fish grills, wine vendors and others are present at the festival and opening hours are even longer than in the past.

Here are some of our favourite images from this year's festival so far:

Has the cost of living crisis sobered up this year's festival?

Rising gas prices as well as the increased cost of ingredients, caused by the war in Ukraine, has raised concerns at Oktoberfest this year - and visitors will notice the impact in their wallets.

But for Germany’s brewers, rising costs go much deeper than simply the price of a round at the festival's long wooden benches.

They are facing higher prices all along their chain of production, from raw ingredients like barley and hops to finishing touches such as beer caps and packing material

Ulrich Biene, a spokesperson for Veltins (one of the largest beer brands in Germany) warns the looming energy crisis is throwing "dark clouds" over the brewing industry.

The family-owned Veltins company has been brewing beer in the small western village of Grevenstein-Meschede since 1824.

He explains that Veltins has seen a dramatic increase in costs since 2021.

Prices for both materials and ingredients have soared, with malt prices for example reaching "historic heights", he says

Biene estimates the brewery could could face a two-to-threefold increase in gas and electricity costs.

The company has been busy preparing for this eventuality however, stepping up production while it can and switching some of its gas-fired equipment to oil.