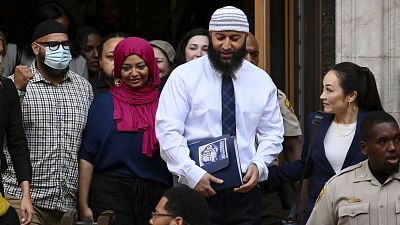 Adnan Syed has been freed after 23 years behind bars for the 1999 murder of Hae Min Lee in Baltimore. But how might true crime podcasts have influenced the case?

The now 41-year-old Syed’s case was revisited after prosecutors uncovered evidence they believed undermined his conviction.

Baltimore Circuit Court Judge Melissa Phinn vacated the conviction, and ordered Syed to be placed on home detention with GPS location monitoring. She also said the state must decide whether to seek a new trial date or dismiss the case within 30 days.

The murder of Hae Min Lee was the case that kicked off the true crime podcast era. In 2014, ‘Serial’, an investigative podcast led by the journalist Sarah Koenig, focused its first season on Lee’s murder and the arrest and subsequent conviction of Syed.

“It was the first podcast to be talked about by the water cooler, a genuine moment where people learned what a podcast was for the first time. It was the breakthrough for the industry,” Damon says.

That first series of Serial featured Koenig raising doubts about the evidence prosecutors had used in the case. The podcast was a massive success and was the first to win a Peabody Award.

The influence of that first series of Serial is hard to understate. While true crime has been a cultural fascination for far longer than the existence of the podcast, the consumability and ability for people outside of the legal proceedings to involve themselves in cases gave a new light to the genre.

Syed’s case also inspired more true crime media, including another podcast from Undisclosed Podcast and the HBO documentary ‘The Case Against Adnan Syed’, based on the Serial podcast.

Although the details of Syed’s release from prison is a result of the work by prosecutors and Syed’s legal team, the influence of the Serial podcast is worth considering.

At the very least, the media attention that Serial brought to the case is likely to have had some sway in Syed’s renewed attempts to have his convictions overturned, starting in 2016 when a lower court ordered a retrial on the grounds he’d been provided ineffective counsel.

Serial’s popularity led to many more true crime podcasts popping up, many of which have also made an impact on the cases they follow.

“I think that every crime journalist hopes to have a positive impact on the cases they work on,” Damon says.

“‘The Teacher’s Pet’ podcast has led to charges being laid and a trial of the accused, to name just one podcast success story,” she adds.

The 2018 podcast followed the disappearance of Lynette Dawson, an Australian nurse. The podcast found evidence around her husband rugby league player and teacher Chris Dawson and created renewed public attention for Lynette’s 1982 disappearance.

Podcast ‘The Murder Squad’ led to the arrest of a suspect in the cold-case 1980 killing of Helene Pruszynski. Podcast hosts retired detective Paul Holes and investigative journalist Billy Jensen asked listeners to enter their DNA into a GEDmatch database.

The fan’s DNA was able to locate that a third cousin was the likely suspect, leading to the arrest 40 years after the murder.

The promise of a group of canny journalists and podcast producers solving cold-cases is a tantalising one. But it’s also one that’s wrought with ethical concerns.

Serial has been criticised for the way it opened wounds for the Lee family and unfairly represented people involved.

One of the people featured, Jay Wilds, has discussed how his dealings with the Baltimore police were impacted by his race, and questions whether Koenig, a white journalist, missed the importance of that.

Similarly, Ayesha Mcclain, the key witness found by the podcast also claimed that Koenig had not been transparent about the process - so that she felt blindsided when the podcast blew up her life.

“I think the Serial controversies have made me consider the issue of ‘parachuting in’ and making stories where you don’t have the consent or participation of the victim’s family. But these issues long predate podcasting,” Damon argues.

Wilds also has complained of the media attention leading to online sleuths and fans of the show harassing him.

Although many true crime podcast hosts take the ethical concerns seriously, they have undoubtedly led to the public attempting to solve cases from their laptops. It can sometimes have disastrous effects.

In the aftermath of the 2013 Boston Marathon bombings, social media users on Reddit took it upon themselves to identify suspects.

Sunil Tripathi, a local student, was falsely identified by Redditors and a campaign was launched on the site to track him down, including contacting the family and calling the news.

Eight days after the attack, and after the real terrorists had already been killed, Tripathi’s body was found in the Seekonk River. His death was ruled a suicide.

When asking the London Metropolitan Police for their opinion on podcast sleuthing, they declined to comment fully, instead noting that “journalists are required to follow UK media law to avoid prejudicing any ongoing legal proceedings.” The Met also sent a link to a book on media law that's sold on Amazon.