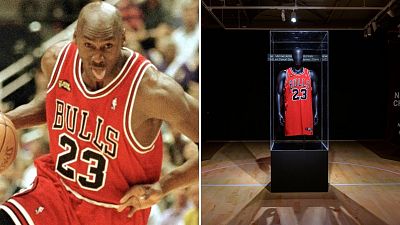 The sale of Jordan's iconic red Chicago Bulls jersey, as seen in the hit Netflix series 'The Last Dance', makes it the highest sum ever paid for a piece of sports clothing.

The shirt worn by Diego Maradona against England at the 1986 World Cup, where he scored twice - including the infamous 'Hand of God' goal - held the previous auction record with a sale $9.28 million (approx. €9.25 million).

According to Sotheby's auction house, the shirt fetched 20 separate bids which drove the price to double its $5m estimate.

The previous record sale for a Basketball jersey was for a game-worn and autographed shirt worn by the late Kobe Bryant from 1996-97, which sold in May 2021 through Goldin Auctions for $3.6 million (approx. €3.59 million).

Whilst the recent sale of Jordan's 1998 jersey has shattered basketball-specific and sports-wide records for game-worn items, a Mickey Mantle baseball card that sold for $12.6 million (approx. €12.5 million) in August holds the record for the most expensive piece of sports memorabilia ever.

Hammer goes down on the bollocks: Sex Pistols art goes on sale