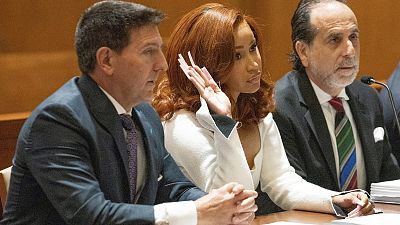 Grammy-winning rapper Cardi B has pleaded guilty to two misdemeanour charges in New York court, avoiding jail time in a deal that closes a years-long case alleging her involvement in a strip club brawl dating back to 2018.

A judge sentenced the "WAP" rapper to 15 days of community service after she pleaded guilty to assault in the third degree and second-degree reckless endangerment, while 10 other charges were dismissed.

Cardi B - real name Belcalis Almanzar - also received a three-year full order protection for the two women involved in the brawl and must also pay their court fees.

“No one is above the law,” said the Queens district attorney, Melinda Katz, after the sentencing.

What exactly went down at the strip club?

The assault charges dates back to 29 August 2018, when Cardi B and her entourage reportedly lobbed bottles of champagne, chairs and a hookah pipe at two sisters who worked as bartenders at the Angels Strip Club in Queens, New York.

Prosecutors in court also said that a week before this incident, Cardi B and her group struck one of the victims, pulling her hair, punching her and slamming her head into the bar.

She ordered the attack on the two women because she believed one of them was having an affair with her husband, the rapper and Migos member Offset.

The superstar artist was represented in court by Drew Findling - the so-called #BillionDollarLawyer who has made a name for himself representing hip-hop stars in Georgia, and more recently was hired by Donald Trump to represent him in an election interference probe.

"She'll be able to move on," Findling said of Cardi after her plea of guilt.

"There are too many things that she has planned for her family, for her career, and for the community, and she just felt quite honestly that a three-week jury trial was going to be a distraction from the things that we felt were most important."

Returning to her luxury SUV following the court proceedings, Cardi B, asked how she was feeling, quipped to reporters that, "I'm feeling like I look good."

When Cardi B met Bernie: The rapper and Sanders talk 'future of America'