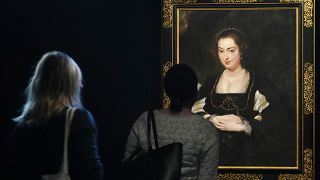 Onlookers view a painting by Ruben at an art auction in Poland   -   Copyright  Czarek Sokolowski
By Tim Gallagher  •  Updated: 15/09/2022

The Polish government has requested the return of a number of looted artworks from Russia.

The works - a selection of masterpieces by Italian painters between the 14th and 18th century - were stolen by the Red Army during World War II. They are now hung in the Pushkin State museum of Fine Arts in Moscow.

The paintings, which include “Two Saints” by Spinello Aretino and “Adoration of the Child” by Lorenzo di Credi, were stored in the collections of the Czartoryski family in Goluchow, at the Wilanow Palace, and in Poznan, Wroclaw and Lodz.

“Traces of hundreds of thousands of items lead to the Russian Federation and to the former Soviet republics,” said Piotr Glinski, the Polish Culture Minister, at a press conference.

“[We] will never stop searching for ... cultural items that were looted.”

Why was Polish art looted in WWII?

It is estimated the 50 per cent of collections were looted from Polish museums during World War II, when the country was occupied by both the Nazis and the Soviets.

The Polish government has already issued 20 requests to Russia for the return of items and artefacts including archives from the Auschwitz death camp and paintings by Durer and Holbein. All so far have been ignored.

“Until this day (Russia’s) government has not reviewed any of the claims,” said Glinski.

Relations between Russia and the former Soviet satellite state have long been strained but hit a new low on Russia’s invasion of Ukraine. Poland has been a big backer of Kyiv and pushed for strong sanctions from within the EU.

Looted Polish treasures can be found in many countries including other former Eastern Bloc members. Since 2016 the Polish government has secured the return of 600 items, none of which were from Russia.