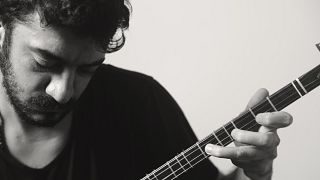 Would you go to prison for your right to make music?

Born in Iran in 1989, Rajabian has only known his country after the Islamic revolution. When the ruling Shah was deposed by the Ayatollah Khomeini in 1979, heavy restrictions were made on the arts.

Anything ‘un-Islamic’ could result in punishment from a fine to imprisonment.

Rajabian never saw the ‘Western’ Iran of the Shah era, but his love for music grew nonetheless and he desired a career in it.

A burgeoning career and a prison sentence

The composer, arranger, and producer founded ‘Barg Music’ in 2007, a company to produce and support banned musicians in Iran.

The idea was a success. People flocked to Barg Music’s productions. Their videos reached over 200,000 views by 2013.

Rajabian was also working on his own album, ‘History of Iran Narrated by Setar’, an album played on the Persian setar instrument, inspired by the musical history of the land.

“In the album, I called the war between Iran and Iraq absurd and announced in a statement on my Facebook that I will release this album soon,” Rajabian tells Euronews.

But the success was a double-edged sword. The increased visibility led Iranian officials to shut down his studio.

His album was banned and all materials, company pages, websites and hard drives related to Barg were seized.

Rajabian was arrested and sent to prison. He spent two years in Evin Prison, Tehran. Three months of that he spent in solitary confinement, blindfolded.

By the time he was released, ‘History of Iran Narrated by Setar’ was long over. But his passion for protecting and promoting unfairly banned arts had not diminished.

“The reason for the arrest,” Rajabian explains, “was because I helped to publish the banned artworks. Any artwork that was not allowed to be produced was widely distributed by my company.”

“We were active in all sectors, from music to books, from visual arts to cinema,” he says proudly.

A second and third arrest

Barely out of prison, Rajabian was arrested again in 2015 and sentenced to six years in prison.

Alongside his brother, the filmmaker Hossein Rajabian, they faced a three-minute trial.

The pair went on hunger strike.

Lasting 40 days, Rajabian claims to have lost 15 kg. The hunger strike was long and gruelling, but eventually worked, freeing the two brothers. His sentence has only been suspended though, and the Iranian government can reimplement it at any time.

During his time in prison, Rajabian devised the ‘Middle Eastern’ project. A multi-medium project that encompassed music, painting, dance, photography, and literature.

I will never censor myself, even if I go back to prison again

The music part’s 2019 release was a success, but the inclusion of a female artist on the project led to Iran arresting Rajabian for the third time in 2020.

“I believe in the freedom of music and philosophy. I will never censor myself, even if I go back to prison again, I will produce whatever I want and whenever I feel the need to scream, be it through the medium of art or physically, I will definitely scream and not be silent. I'm not brave, I'm just doing my duty,” Rajabian says.

Released on bail, Rajabian retreated to his home where he recorded a new album, 2021’s ‘Coup of the Gods’. To create the album, he recorded his instrumental parts secretly in his basement and sent it to a host of American producers, mixers, and artists to complete.

“Due to the complete ban, my only communication bridge is the internet, because here musicians and many people are afraid to even talk to me, so I have to communicate with musicians outside Iran to produce music,” he says.

Coup of the Gods didn’t put him back in prison, and so he began working on a fourth album, ‘It Arrives’. Released on 10 September, Rajabian has pushed forward to create the work in the face of oppression.

But he is unfazed. His work is to face the oppressor through his music.

An artist should be a physical fighter, that is, he should know prison, solitary confinement, hunger strike, torture... and not be afraid

“The fact that a number of artists remain silent in the face of oppression, I think they are complicit with the oppressor,” Rajabian says. “

"I have been in prisons since I was twenty years old and I have never censored myself. I believe that an artist should be a physical fighter, that is, he should know prison, solitary confinement, hunger strike, torture... and not be afraid. But his work of art should be philosophical and full of thoughts so that he can identify the root.”

The album was once again produced in secret with a host of US artists filling in the gaps.

One of those artists is Grammy Award winner Amy Andersson, a classical musician.

“Mehdi and I know each other through our Grammy community and have taken interest in each other's musical pursuits. Many of the featured artists on his album ‘It Arrives’ are colleagues and friends of both of us and so it was natural that we would collaborate in releasing this album together,” she explains.

“The release of It Arrives is important musically, of course, but very important on the human level, considering his circumstances,” Andersson adds.

It Arrives is in part a hopeful album. “As the album name suggests, we are waiting for something to happen,” Rajabian says. He talks of music pieces filled with different colours demonstrating the feeling of anticipation.

Those colours are there to fight off a numbness that humanity can feel when it becomes too used to oppression, he argues. “I wanted to take the listener to a world full of hope and different colours to say that we can overcome these bad events, we should not be indifferent to the events around us.”

But while the music is filled with hope, Rajabian doesn’t not see change coming anytime soon for Iran.

“There is no future here and as long as our situation is like this, I am never optimistic about my future.”

"Why should we wait in jail to produce music, to express our thoughts, for just one interview? We still have the effects of hunger strike, solitary confinement, prison... But we never get tired, Because it arrives.” he says.

A conversation with your next musical obsession: Clipping.