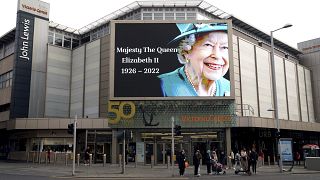 Yesterday the news broke that Queen Elizabeth II had died, ending an era for the United kingdom which has lasted for more than 70 years.

As King Charles III ascends the throne and a nation reflects on its collective identity, the nation - already in a state of economic and political turmoil - has gone into mourning with public life grinding to a halt.

Planned strikes by rail and postal workers will not go ahead and the House of Commons will not sit during the official mourning period, at a time when big decisions need to be made about the cost of living crisis.

Elizabeth II was known for her enjoyment of sport and appreciation for animals as well as many appearances at cultural events. Her now legendary cameo in the London Olympics opening ceremony in 2012 was one way she put her stamp on media on the world stage, with an amusing follow up earlier this year when she had tea with the iconic Paddington bear.

In light of her death the UK sporting world and cultural sector - which is internationally renowned - is bereft, and many important cultural and sporting events have been cancelled out of respect for the beloved Queen.

This will come as a disappointment for many, including tourists who regularly travel to the country to attend such events.

Let’s take a look at the cultural and sporting institutions paying their respects this weekend to Britain's longest reigning monarch.

What events are cancelled because of the Queen’s death?

The Royal Albert Hall has announced that the final two nights of the Proms, an eight-week classical music festival, will not go ahead on Friday and Saturday as planned

Likewise the Mercury Prize - one of the UK’s most prestigious awards for British and Irish artists - was called off last night on news of the Queen’s death.

The producers of ‘The Crown’ earlier today announced the postponement of the series on Netflix. The show dramatises the events of the Queen and the rest of the royal family’s lives.

The England vs South Africa men’s game at The Oval in London was called off, along with all matches in the Rachael Heyhoe Flint Trophy, the women's domestic competition.

In the world of Rugby Union on Thursday Northampton postponed their Premiership Rugby Cup match against Saracens. Likewise the Scottish Rugby Union have called off the women’s summer Test international between Scotland and Spain on Sunday, along with all domestic matches this weekend.

In Rugby League, Friday’s fixture between Sheffield Eagles and Dewsbury Rams is postponed.

In the arena of Britain’s national game the Northern Ireland Football League matches between Cliftonville and Glentoran and Larne and Dungannon have been postponed, along with the Burnley and Norwich championship game in England on Friday.

The Scottish Professional Football League also called off the Championship game between Dundee and Cove Rangers scheduled to happen on Friday night.

However the Europa League matches between Manchester United and Real Sociedad and West Ham game and FCSB went ahead on Thursday night with pre-match tributes.

One of the Queen’s favourite sports - horse racing - has also been affected. Racing at Southwell and Chelmsford on Thursday and the third day of the St Leger meeting at Doncaster on Friday were both called off in light of the tragic event.

The Tour of Britain is at its midway point and after the Queen's death was announced last night, organisers said Friday's stage would not go ahead. No news has been announced about the rest of the race yet.

Police, passports and postboxes: What does the Queen's death change?

'The world weeps': Europe's newspapers pay tribute to the Queen