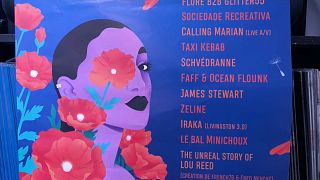 In the southern French city of Lyon, a music label is trying to keep the flame of independence alive in an industry dominated by profit.

Jarring Effects is based in the city’s Croix-Rousse district. And it claims to support its artists without being motivated by monetary success.

To celebrate its 27 years of history, the group is now hosting a festival that runs through this weekend. (September 9 to 11)

"Jarring Effects is 27 years of 'audio-activism',” said Mr. Mo, a manager with the label.

“What characterizes us is that we are not looking for trendy or mainstream music. We are defending our artists.

“We don't fit into boxes, and on the contrary, we like to break the codes a bit.

“It's an open-mindedness to welcome a maximum of artists by associating this electronic music with styles, from techno to urban music, and also, we'll say 'world music'."

The festival will feature one of Lyon's most famous DJs, Flore, who will share the stage with Moroccan artist Glitter 55, bringing together techno, house, and dub, a musical style developed from reggae.

Sociedade Recreativa from Brazil is another member of the line-up. The band combines traditional music from its home country with dub, bass, and hip-hop.

Despite these international artists, the label had local origins, signing groups from Lyon since the 1990s.

"We have always worked with people from the neighbourhood, that's the basis,” said Céline Frezza, the label’s artistic director

“At the same time, we have always wanted to open up to the international scene. The first countries we worked with a lot were Bosnia-Herzegovina and South Africa.

“The cooperation between, precisely, all the people who defended a new way of making music and another way of being together, here we are looking for these people everywhere in the world."