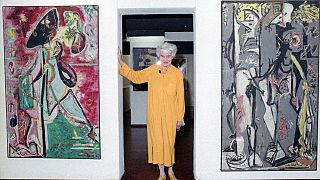 It's a special time of year for culture, with some fascinating exhibitions taking place right across Europe. Let's take a look at some of the continent's biggest events.

This year's Jazz à la Villette festival, in Paris, sees the Americans return in force after having been deprived of the European stage after the last two years of pandemic disruptions.

Jazz à la Villette showcases genuine legends of the scene, such as Fred Wesley and his brass section who worked wonders with James Brown. There are also many undiscovered groups where funk, hip-hop, soul, and jazz collide.

While the film festival is in full swing elsewhere in the city, Peggy Guggenheim's incomparable collection can also be discovered in Venice's Dorsoduro district, opposite the stunning Gran Canale.

All the greatest names in 20th-century art are gathered in the Palazzo Venier dei Leoni. Paintings and sculptures can be discovered both in the Palace and in its gardens and there's a rare exhibition dedicated to the magic of surrealism.

Every year, the city of Brussels becomes the capital of all things fantastic. The BIFFF is one of the biggest International Fantastic Film Festivals in the world, screening over 100 films during its 13-day marathon from a variety of genres including thriller, science fiction, cult, horror, animation, experimental, underground and much more.

This year, 90 feature films and 100 short films are lined-up for world, European and Belgian premieres.