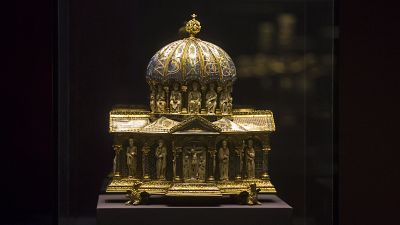 An American court has thrown out a lawsuit filed by heirs of Nazi-era Jewish art-dealers against a German museum foundation, ending a very long and bitter feud.

At the heart of the dispute lies a medieval treasure called the Welfenschatz, or Guelph Treasure.

It's a collection of 44 ecclesiastical art pieces valued at 220 million euros dating back between the 11th and 15th century. The works include gold and silver crucifixes, altars, intricate silverworks and other relics.

The U.S. District Court for the District of Columbia justified its decision by saying it lacked jurisdiction to hear the lawsuit and granted the foundation’s motion to dismiss the case which dates back to 2015. Barring an appeal by the plaintiffs, this marks the end of the case in the United States.

The heirs of the art dealers filled their petition maintaining that their ancestors had no choice but to sell the art pieces to the Nazi government in 1935 and well below market value.

The collection has been on display in Berlin since the early 1960’s at the Bode museum and is considered the largest collection of German church treasures in public hands.

The Christian artefacts were originally acquired by the House of Guelph in 1671. Then comprised of 82 objects, it was sold by Duke Ernst-August of Brunswick to a consortium of art dealers in 1929 just a few weeks before the Great Depression.

Following the financial crash, the latest owners sold part of the collection to Americans in 1932 and stored the rest of the medieval treasure in the Netherlands for safety until the sale to the Nazi government.

The heirs originally filed their claim in Germany, but the Limbach Commission, responsible for restitution claims on Nazi-stolen art, found that the sale had been made voluntarily by the Jewish art dealers and for fair market value.

Speaking to German's state media, the SPK foundation president said the sale was a result of intense negotiations, wherein one of the dealers who led the purchase negotiations, Saemy Rosenburg was based in Amsterdam with the remaining collection – outside the German Reich. He added that the collection was sold for 4.2 million Reichsmarks- around 100 million euros today and that  Rosenberg was able to select some items from Berlin’s museums, in exchange for his share.

Not satisfied with the legal decision, the plaintiffs then filed a suit in the United States, where Germany and SPK, argued the case did not belong in American courts.

On Tuesday, the president of SPK, Herrmann Parzinger, welcomed the court decision.

“SPK is pleased with the district court’s ruling, which affirms SPK’s long-held assessment that this lawsuit seeking the restitution of the Guelph Treasure should not be heard in a U.S. court,” Parzinger said.

“SPK has also long maintained that this lawsuit lacked merit, as the Guelph Treasure’s sale in 1935 was not a forced sale due to Nazi persecution,” he added.

This latest ruling in the proprietary dispute follows the 2021 US Supreme court ruling which overturned a lower court’s denial of the Berlin foundation’s previous motion to dismiss the lawsuit.