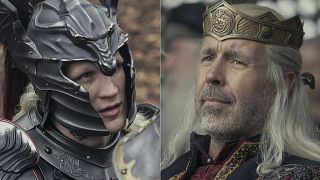 Episode one of HBO’s ‘House of the Dragon’ was released last week to delight from critics and audiences alike.

The much anticipated prequel to the decade-defining show ‘Game of Thrones’ promises a wild ride for viewers who have been missing the ‘tits and swords’ franchise from their screens.

Although for many ‘Game of Thrones’ (GOT) ended in disgrace with a shockingly rushed final season that besmirched beloved characters and dishonoured loyal fans, the new series promises a new ride in the magical kingdom of Westeros.

But finale aside, will ‘House of the Dragon’ live up to GOT in its heyday? And will it fix any errors of the past?

The story takes place 200-years before the plots of 'Game of Thrones' and the opening episode was already the most watched in HBO history.

Let’s take a look at how 'House of the Dragon'' measures up against its beloved forerunner, 'Game of Thrones'. And needless to say, if you don't want the story spoiled, then close your eyes till the end of this article.

GOT was famous for its battle scenes, mutilation, beheadings, flayings, dismemberments, castrations, live burnings, eye-gaugings, throat-slittings, and much more.

So far on the violence count for episode one there was a tourney which featured unhorsed knights with bruised egos which swiftly turned into a brutal melee with plenty of blood and head injuries. Juxtaposed with this was an extremely graphic caesarean section which spared the viewer nothing in the realities of the unsanitary and dangerous process of childbearing for women for most of human history.

We were also treated to a brutal meating out of justice by Matt Smith’s Daemon Targaryen and his gang of gold cloaks who set to work chopping off the hands, heads and genitals of suspected criminals.

The images of lopped-off body parts and blood and guts of knights and queens seemed even more visceral than in GOT, and with rumours of a pirate who feeds his enemies to crabs in the pipeline, blood thirsty viewers won’t be disappointed.

A turn away from misogyny?

Back in the day GOT was persistently criticised for its misogynistic attitude to women and sexual violence.

Endless scenes of brothels to provide so-called ‘sexposition,’ using rape as a plot and character development device, and even one episode where a woman was forced to undertake a nude walk of shame began to turn viewers off.

This time around the gender-politics of ‘House of the Dragon’ are much more nuanced. A sex worker insightfully counsels a man on his erectile dysfunction, a rapist has his penis removed in what is potentially a heavy-handed metaphor for the tonal shift of the show, and most importantly the aforementioned birth scene highlights the difficult position of women in a patriarchal society.

Given that Princess Rhaenyra looks set to be the Danaerys of the prequel (but hopefully with less mania towards the end) ‘House of the Dragon’ looks intent on righting the wrongs of its forebears.

‘Game of Thrones’ was a sprawling, world-making series that took us to every part of the Seven Kingdoms as well as the Free Cities.

In ‘House of the Dragon’ most of the action so far has been in the capital city of King’s Landing, and as all the principal characters are housed in the Royal Castle of the Red Keep it seems set to stay that way.

Having said this Daemon has just flown off the Vale of Arryn (home of creepy mother and son duo Lysa and Robin Arryn from GOT) and there’s talk of a pirate problem somewhere called the Step Stones so the writers are leaving room for manoeuvre on location.

Only the ‘Harry Potter’ franchise has employed more British actors than ‘Game of Thrones’ but luckily ‘House of the Dragon’ has mopped up a few cast members who weren’t in the original.

Matt Smith (who having already played Doctor Who and Prince Philip in ‘The Crown’ probably can’t go anywhere without being recognised) plays Prince Daemon Targaryen, meanwhile Paddy Constantine acts as his brother King Viserys I with a charming reticence.

Young talent Milly Alcock and Emily Carey play best friends Princess Rhaenyra Targaryen and Alicent Hightower but are set to be replaced by older actresses with an uncanny likeness when the series jumps forward a decade later on.

Meanwhile the small council is packed full of British household names including Rhys Ifans, David Horovitch and Bill Paterson (otherwise known as the dad from ‘Fleabag’). We haven’t even met all the characters yet so Phoebe Waller-Bridge herself might make an appearance (please!).

We also need to make a special mention for CGI cast members; the dragons! Set to be more integral to the fabric of the show, it was reported that €20 million was spent on ‘House of the Dragon,’ and a large part of the budget has surely gone on these flying wonders.

The flip side of the violence in ‘Game of Thrones’ was always the plotting and courtly intrigue which saw sparring matches and hushed asides between big name characters, as well as stunning performances from heavyweight actors.

For ‘House of the Dragon’ there’s already been a subtle hint at personal histories and future ambitions between Matt Smith and Rhys Ifans, and exposition about a bitter past and ambitious future for Rhaenys Targaryen played by Eve Best.

A lot of the game of thrones is settled on the battlefield but in equal measure moves are made in the council chamber. Don’t sleep on ‘House of the Dragon’ and its ability to create a tense political atmosphere for the ages.

Last series of 'Game of Thrones' promises to thrill