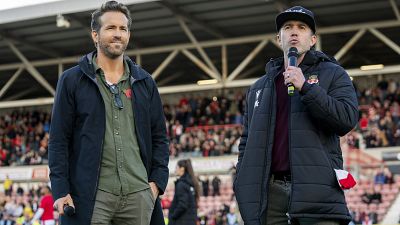 In February 2021, Hollywood actors Ryan Reynolds and Rob McElhenney took over Wrexham Association Football Club, a small team from the north of Wales, and now they're releasing a documentary about their journey.

'Welcome to Wrexham' begins with the initial late-night conversation between the actors where the idea was formed.

The show then fast forwards in time to them standing with the club's fans in the terraces cheering on the team, which they now co-own.

The show hops from Hollywood to Wales, from pitch to the pub, with two of Hollywood's biggest stars hoping to improve the team and bring positive change to the local Wrexham community.

Deadpool star, Reynolds says he has fallen head-over-heels in love with the beautiful game.

"I am so obsessed with this sport now that I actually hate this sport. Like, I wish it didn't occupy my every thought," jokes the actor.

At first Reynolds and McElhenney had very little experience and knowledge of football but, with a little bit of help from their friend David Beckham, they are now experts on the sport.

Reynolds describes the former football star as the "nicest man in the world," who gave them both "a lot of tips that have been incredibly helpful."

Where can you watch Welcome to Wrexham?

Welcome to Wrexham is available to stream on Hulu, Disney+ and ESPN+.

It released in the US on 24 August exclusively on Hulu.

The show is now also available for UK audiences on Disney+.

Check out the video above for a preview of the show

As Europe closes its borders, Wales becomes a 'nation of sanctuary'