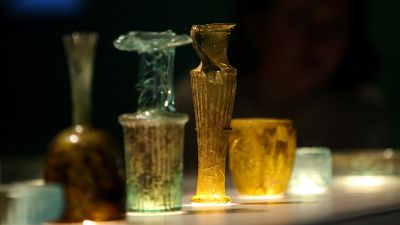 Conservators at the British Museum in London have revealed eight pieces of ancient Roman glassware that they have repaired after they were shattered in the Beirut port blast of 4 August 2020.

The delicate artefacts belonged to a case displaying 74 glass vessels at the American University of Beirut, which was destroyed when the shockwave from the port explosion hit the building.

Despite the shards of ancient glass mixing with those from the case and surrounding windows, conservators took on the painstaking project to piece them back together.

"(It) tells a story of near destruction and recovery, of resilience and collaboration," said Hartwig Fischer, Director of the British Museum.

The process of resorting the individual pieces of glass, which began in 2021, was not an easy task.

"It's all pretty much done by hand or by eye - brainwork basically. You have to know certain techniques to be able to carry out this work," said Duygu Camurcuoglu, a senior conservator at the British Museum.

Once the pieces had been sorted, the conservators began the mammoth jigsaw-puzzle exercise of reassembling the vessels.

Eighteen of the vessels have so far been conserved as part of an emergency recovery campaign in Beirut, along with the eight vessels at the British Museum and two that emerged undamaged from the fall.

Early on in the project, conservators agreed to make the vessels structurally sound but leave the imperfections caused by the shattering.

The visible scars and missing fragments bear witness to the explosion and the determination of the people of Lebanon to recover from the tragedy.

The exhibition lets visitors explore the journey undergone by the glass vessels, from the moment they were shattered in Beirut, to their display in the British Museum.

After being shown in London's famous museum, the vessels will return home to Beirut.