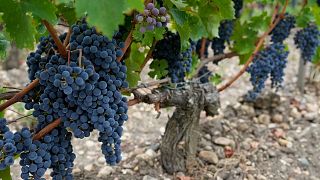 The wine harvest has started up to a month earlier in some of Europe's most famous wine regions this year, after a summer of droughts and record-high temperatures.   -   Copyright  AP Photo/Francois Mori
By Giulia Carbonaro  & AP  •  Updated: 26/08/2022

The wine harvest season is starting early this year in France, Germany, Italy and Spain, as extreme heat and little rainfall this summer are forcing winemakers to pick their grapes up to a month before they usually would.

In France’s famous Bordeaux vineyards, which produce some of the finest wines in the world, the harvest which traditionally starts in mid-September has kicked off in mid-August this year. No rain fell in the region between the end of June and the middle of this month. As the entire country reported highest temperature since 2003, the grapes simply ripened much earlier.

In Germany, the harvest is starting “exceptionally early” this year, according to the German Wine Institute (DWI), “due to continuously sunny weather”, with most of the vineyards still “doing well” despite “extreme droughts”.

Tuscany, one of Italy’s major wine regions together with Veneto and Piedmont, has also been suffering greatly from this summer’s heatwave and severe droughts, with wine producers and grape growers reporting that their grapes have ripened earlier this year.

Between Viareggio and Lucca, in the Tenuta Mariani, the harvest began two weeks in advance as grape growers salvaged what had survived this summer’s scorching sun, securing this year’s Chardonnay and Pinot Grigio production.

In Spain’s Catalonia region, the harvest started between seven and ten days earlier this year, according to the Catalan Institute of Vine and Wine (INCAVI), as the institute warned that the annual crop will be 15 per cent lower than previous times.

In Villaverde de Medina, the Caserío de Dueñas winery has reported its earliest harvest since the 17th century, when records began, when its workers started picking the estate’s Sauvignon Blanc grapes.

An early harvest is just one of the many challenges facing the win industry as climate change makes an  increasing impact. Differences in taste and a rise in sugar and alcohol content are all linked to higher temperatures and sunnier, drier weather, as well as smaller grapes.

“We have smaller grapes, and we expect the number of grapes to be lower than the average of the last few years, probably in line with last year’s”, Sergio Zingarelli, vice-president of the Chianti Classico Consortium in Tuscany told Reuters.

The smaller grapes are the ones that survived the scorching sun: while older vineyards are more resilient to extended periods of droughts thanks to their deep roots, younger vineyards “suffer significantly from the lack of water, especially on light soils that do not retain much water,” writes the German Wine Institute. In extreme cases, the vineyards have to be irrigated and grapes have to be removed from younger vineyards to guarantee their survival, the institute writes.

But the early harvest, despite its challenges, is not all bad news for winemakers. Grape growers are reporting that the dry weather this year has caused a drop in downy mildew which guarantees a better quality harvest, even as the actual number of grapes picked might be lower as some fruit got burnt by the heat.

“But if you turn to the future, and if you increase the temperature by one degree more, plus, you will lose the freshness part in the balance of the wine”.

With climate change come also extreme weather events, like hail storms, floods, fires and frosts which could irreversibly damage Europe’s vineyards. At stake, there is not only the availability and the price of some of the world’s most beloved wines but also the cultural heritage and traditions of regions that have made wine-making part of their identity as well as their livelihood.