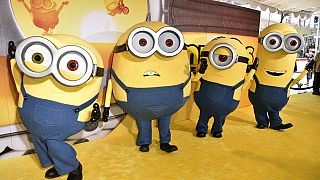 The latest incarnation of the hit film series Minions was released in Chinese theatres last week - but with a twist. Unlike Western audiences, cinema-goers in China were treated to a different ending of 'Minions 2: Once Upon a Time Gru'.

In the original film -- which chronicles the life of 'Despicable Me' super-villain Gru -- one of the main characters, Will Karnage, escapes justice for attempted robbery by faking his own death.

However, in the version released in mainland China, Karnage is caught by the police and sentenced to 20 years behind bars. Once inside he even sets up his own theatre troupe.

As for Gru, he gets "back on the right track" and becomes a role model father --  disregarding the previous films in the franchise.

Of course, there are many cultural and political reasons why films may end differently in a country.

In China, all media must first pass through a censorship committee before it can be released, though it is not clear if Minions 2 was changed by censors or the film's producers.

Yet this is not the first time a foreign film has been modified in China. Just check out these alternative endings. Oh, here's a warning *Spoiler Alert* for those who've never seen any of the following movies.

In January this year, Twitter was alight over how the end of David Fincher's cult classic 'Fight Club', starring Brad Pitt and Edward Norton, had been modified before being broadcast in China.

Instead of the protagonists blowing up the headquarters of several banks, erasing their customers' debts, police thwart their plan, a text at the end of the Chinese version indicated.

Law enforcement, on the side of justice, foiled the anarchist scheme of Tyler to destroy consumer capitalism.

Again it is unclear if the ending was altered out of self-censorship by the Chinese streaming service Tencent Video or by government order. But just over a week after the storm erupted Tencent restored the original ending.

“There is no point watching this film without that scene,” a person commented on the microblogging site Weibo.

In China's reimagining of Lord of War, which is nearly 30 minutes shorter than the original, the initial conclusion is replaced entirely.

Rather than getting off scot-free for pumping weapons into some of the most volatile contexts on Earth, lead character Yuri Orlov “confesses to all the crimes he faces officially in court, and is sentenced to life imprisonment.”

Posting a screenshot of the alternative ending on Twitter, one user commented: "China has a stringent censorship system to ensure all TV programs, dramas and films released to the public reflect what the Communist Party deems correct aesthetics, morality, and ideology."

Lord of War, which stars Nicholas Cage, is loosely based on the colourful life of Viktor Bout, nicknamed the merchant of death.

A former Russian lieutenant, Bout was one of the world's biggest arms dealers, flying Soviet arms into battlefields from Liberia to Afghanistan. He was arrested in 2008 at a five-star hotel in Bangkok, following a years-long international investigation.

People sharing screenshots of Fight Club's alternative ending on Twitter inspired many other users to share similar images from different films under the hashtag #ChinaEditChallenge.

Whistleblower and former NSA contractor Edward Snowden even got involved, sharing edits of Star Wars: Return of the Jedi.

Cutting out the final action scene in which the Rebel Alliance destroy the Death Star in a climactic dogfight, the film skips directly to an unexplained explosion.

The "terrorist attack" is successfully prevented, while the rebels are arrested and "sent to a lunatic asylum," according to the final text in the Chinese version.

"They were discharged from the hospital after reforming their ways," it adds.

The 1991 tale of humans caught in a simulated reality was also given a Chinese twist.

Inspired by the philosophy of Plato, the sci-fi film depicts a dystopian future in which the world is dominated by cold, calculating machines.

In the version released in China, main character Neo is gunned down by agents protecting the system and his fellow freedom fighter Morpheus "divulges all enemy information and [is] converted back peacefully into the Matrix."

And it is not just politics.

LGBTQ plotlines from hit US sitcom "Friends" were also removed in China before it was streamed earlier this year.

Disney's latest animated film, "Lightyear," was not even released in China as the company refused to remove a scene showing two female characters kissing.