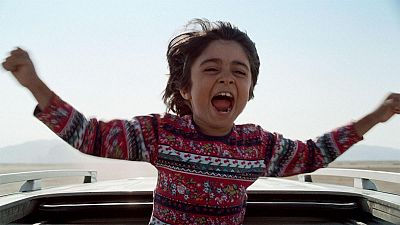 Following our summer recommendations ofthe best queer readsandthe podcasts you shouldn’t miss out on, here are the films already released this year that prove 2022 is already great for cinema.

The first half of 2022 is officially over.

Before the fall festival season starts and we hear word from Venice and Toronto about the likes of Blonde, The Banshees of Inisherin, Don’t Worry Darling, and all the other names that are going to monopolise the conversation during the second half of the year, these are the already-released 2022 films you should cross off your watchlist.

Everything Everywhere All At Once

It seems like everyone, from Rick and Morty to Marvel and DC, is embracing the multiverse craze at the moment. But this initially tantalizing narrative device, revolving around an infinite number of parallel universes, is fast becoming a tiresome trope. Everything Everywhere All At Once is different though, managing to comfortably overshadow Marvel’s underwhelming Doctor Strange In The Multiverse of Madness and becoming the best-selling film for company A24.

Directed by Daniels (Daniel Kwan and Daniel Scheinert, the bonkers minds behind Swiss Army Man), it’s an inventive and daring take on the ubiquitous subgenre that’s brimming with boundless ideas and madcap flourishes. The plot follows a laundromat owner (Michelle Yeoh) with tax problems, who discovers that multiple versions of herself can potentially sort out her IRS woes, fix her existential funk, and help her to save the world from a bagel-shaped black hole. Cue: an action scene centered around a butt-plug, a universe where everyone has hot dogs for fingers, and the most ‘WTF’ scene of the year that features an existential discussion between two rocks.

Chockablock with Dadaist goodness, the Daniels never lose sight of an emotional pull that makes all the characters devastatingly relatable. The musings about unconditional love are heart-stoppingly potent and ensure that you won’t see another film this year that tickles your weird bone this much.

There are some films that you like with minor reservations, and then there are films like Jaddeh Khaki (Hit The Road), an emotional ride that is quite simply perfect. The debut film by Panah Panahi – son of acclaimed Iranian filmmaker Jafar Panahi, who was sentenced to six years in prison by the country’s oppressive regime this year – is beautifully compelling.

Set in the valleys of north-western Iran, it sees a family embark on a cramped road trip. We’re not sure why. All we know is that they have left everything behind, that SIM cards need to be destroyed, and that the journey culminates with the couple’s eldest son (Amin Simiar) getting smuggled out of Iran.

Danger is lurking, but the mood is kept light, a bid from the older generation (Pantea Panahiha and Mohammad Hasan Madjooni, both giving career-best performances) to preserve the innocence of their youngest son, the six-year-old hyperactive agent of chaos played to perfection by newcomer Rayan Sarlak.

It’s this tonal balancing act that works so many wonders: Panahi deftly interweaves tragedy and irreverent humour, peppering in some gentle elegiac moments that enrich the film’s emotional core. The political commentary and barbed critique of Iranian society is present but seems to have been elusive enough to pass government censors. And thank the celluloid gods for that, as Hit The Road is a tragi-comic tour de force that culminates with a final shot that will leave you speechless.

Audrey Diwan’s unmissable, Golden Lion-winning film L’Événement (Happening) is adapted from the best-selling autobiographical novel by Annie Ernaux. It focuses on a student’s (a note-perfect Anamaria Vartolomei) determination to find a way to terminate her pregnancy in order to continue with her studies and her life: “I want a child one day, but not one instead of a life.”

The snag is that the story is set in France in 1963 when abortion is illegal. Those who seek a clandestine abortion risk it all in a “lottery”: if caught, it’s either a prison term or death.

In a year in which the US Supreme Court overturned Roe v Wade and set society back by decades, L’Événement couldn’t be a more timely and vital watch. It shows the realities of illegal abortions and, impressively, neither exploits the right to choose as a partisan issue nor stumbles into didacticism. It’s not a question of being pro-choice or pro-life; the film eloquently states that freedoms have been denied to women and that removing a person’s right to choose is tantamount to madness.

Atmospheric, poignant and socially resonant, this one will leave you shell-shocked.

The Worst Person In The World

The spellbinding Renate Reinsve plays Julie, a restless young millennial approaching 30 who is figuring out what do to with her life and with whom she wants to spend it.

While this one-line skinny could set off some alarm bells for any viewers sick of standard coming-of-age romcoms about a quarter-life crises, The Worst Person in the World is so much more than its set-up. Playing out over 12 chapters with a prologue and epilogue, it is an incisive, funny and disarmingly self-aware story about how human it is to stumble, and how people collide into each other at the right and wrong times in their lives.

Trier injects some visually ingenious and at times beautifully surreal sequences into quotidian moments, and the film ends up feeling like a true rarity: an honest romantic film that allows its characters to be flawed and not judged. The emotions, dialogue and sex scenes ring true, and the final resolution (with a gorgeous ending needle-drop) doesn’t betray the journey the characters have been on. Renate won the Best Actress prize at Cannes last year for her efforts, and her performance alone makes this an intoxicatingly romantic whirlwind you don't want to miss.

For his third film, Jordan Peele has constructed a blockbuster unlike any other, tipping his hat to ‘50s sci-fi whilst breaking new ground.

It’s worth not revealing too much about Nope, as it’s one of those films that benefits from knowing as little as possible. Frustratingly, the trailers have partially spoiled some elements (which is why the video below is only the 30-second teaser, which spoils absolutely nothing). Safe to say that it’s an ambitious epic that merges sci-fi tropes, Western coda and horror elements to tell the story of ordinary people (Daniel Kaluuya and Keke Palmer) facing extraordinary circumstances.

It provokes the same sense of awe and wonder as Close Encounters of the Third Kind and addresses the way we imagine the spectacle of alien life beyond the visual shorthand so many other films tend to fall back on. In doing so, Peele departs from the norm and thrillingly interrogates Hollywood’s exploitative nature, pays tribute to the forgotten voices of the film industry, and explores how the human race treats the figure of the Other.

On a formal level, this is Peele at his most intimate, as it’s first and foremost the tale of two siblings; yet, Nope is his most visually expansive film. He teams up with cinematographer extraordinaire Hoyte Van Hoytema (Let The Right On In, Interstellar), whose work in tandem with sound mixer José Antonio García ups the unsettling quality of certain details that would have otherwise been ignored.

Get Out was one hell of a calling card. Us furthered the filmmaker's genre ambitions. Nope truly shows Peele working at the summit of his craft. Three for three then. Can’t wait to see what’s next.

This deliciously savage send-up of the filmmaking world’s self-obsessed elites is the caustic comedy of the year (so far).

The trio of actors bounce off each other beautifully, with special mention going to Cruz and her wonderfully subversive frizzy perm. However, the film’s main draw is the riotous script. Through its lampooning insights, the audience is treated to a satire made by people who genuinely know the film industry, as opposed to people who think they know what goes on behind the glitzy Hollywood curtain. Most impressive of all, the dark comedy exposes the absurdities within the film (and film festival) world in order to ultimately fashion an homage to the unique craft of filmmaking.

After her prize-winning short of the same name, Swedish writer-director Ninja Thyberg’s Pleasure dives into the world of the adult film industry with a critical eye. Her audacious debut feature is an unflinching and layered examination of a stigmatised world, which we see through the eyes of a young Swedish performer, Bella Cherry, who heads to LA to become porn’s next big star.

Fair warning for those who need it: Pleasure is sexually explicit and isn’t recommended for younger audiences… Unlike the final entry…

Up until Turning Red, no Pixar film had been solo directed by a female filmmaker. It’s taken them 27 years but this year, Chinese-Canadian filmmaker Domee Shi has delivered a terrific creature feature about Mei, a 13-year-old girl on the cusp of adolescence who morphs into a giant red panda when she starts to experience changes in her body and her emotions become too strong. Mei discovers from her overbearing mother that this is a tradition passed down to her through generations and that the red moon will rid her of the “curse.” But Mei isn’t convinced she wants her panda self to leave.

While Pixar has never shied away from exploring knotty issues and doesn't talk down to its audience, the fact that they’ve made a joyous coming-of-age story that isn’t a fetch-quest and that candidly explores growing pains and female puberty is something to be celebrated.

Based on Shi’s childhood (except the fluffy ursid part, unless she tells us different), this endearing gem of a film feels more personal; it is infused with loving details about Chinese folklore and 90s nostalgia for Tamagotchi and boy bands.

Whatever age you are, Turning Red's empathetic treatment of themes of friendship and the importance of self-worth make it a must-see. And if you’re a fan of Billie Eilish, the Billie-Finneas duo have crafted a soundtrack full of pop bangers that’ll have you humming the film's tunes for the foreseeable.

There we have it. How many have you seen?

Yes, Top Gun: Maverick and Elvis were a blast; no, the inexplicably overrated The Batman shouldn’t be on this list; and do keep your eyes peeled for 2022 Cannes titles Decision To Leave and Boy From Heaven – both would have made the cut had they been released in more than a handful of territories. They will enjoy a wider rollout in the second half of the year.