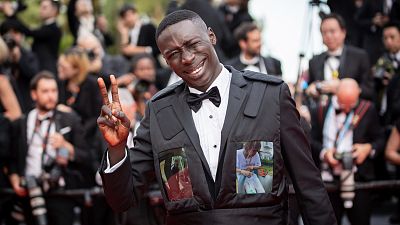 Khaby Lame, the world's most followed TikTokker, has become an Italian citizen.

Lame was born in Senegal then moved to Italy as a young child and was raised in a poor area of the town of Chivasso, outside of Turin.

When COVID hit, the 22-year-old lost his job in a factory and was forced, like millions of Italians, to stay home.

Lame took to social media to pass the time, and with his silent videos he shot to TikTok stardom. He currently has 148.5 million followers and has become an international star. Last June, he dethroned the American Charlie D'Amelio and his 142 million subscribers.

His trademark? Mimed and silent reactions to events he considers absurd, with the TikTok motto: "If u wanna laugh u r in the right place."

Despite his worldwide success and ensuing sponsorship and endorsement contracts, Lame is proud of his humble origins.

After the ceremony held on Wednesday in Chivasso, in which he was officially granted Italian citizenship, Lame recalled his childhood on Via Togliatti in a poor neighbourhood.

"I have always lived in the slums, but there, in our having nothing, we were happy, we were glad, we played in the courtyard, even though we had nothing."

Lame, like many children of migrants in Italy, had to wait until he was an adult to become a citizen.

"I already felt Italian before, I mean, before today," he said. "So very little has changed."

In Italy, the right of blood prevails and not the law of the ground: it is necessary to have an Italian parent to obtain Italian citizenship, otherwise the steps are often very long.