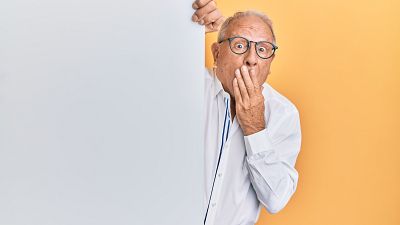 These adverts were so shocking they were banned in European countries   -   Copyright  Kraken Images
By Tim Gallagher  •  Updated: 19/08/2022

Adverts are powerful. They can build a brand, create a lasting bond between company and customer, and provoke viral conversation on social media.

But what happens when adverts go wrong?

This week an advert by UK company Crown Paints depicted a budding romance between a couple, Dave and Hannah, who met at a rave. The ad culminates pregnancy and features the line; “Now the baby’s coming and they don’t know what it is. Hannah’s hoping for a girl, Dave’s just hoping that it’s his”.

Cue: collective outcry, with many describing the ad as sexist. Crown Paints have defended it as depicting “an empowered female character, comfortable in making her own decisions”.

Controversies like this crop up now and again, and in the fever pitch to grab attention by shocking audiences or making them laugh, some advertisers can take things a little far. We all love a good giggle but sometimes sexist language or a minor holding a sex toy can provoke a public backlash.

Is this censorship gone too far? Or merely the laws of good taste coming into effect?

Euronews Culture takes a look at some famous European adverts that were banned due to offending public sensibilities.

Long before Duolingo, the Soesman Language Institute was trying to get people to pick up a phrase book. In an admirable drive to sell their training and improve linguistics in Europe, Soesman turned to advertising - the best way to reach the masses.

In 1998, they made a Dutch advert that featured a family of middle-aged parents and two daughters turning on the radio and singing along to an English-language song, which had some unfortunate lyrics.

As the family drove off, dancing to "I wanna f*ck you in the a**," a message flashed up on screen: "Wanna learn English?"

The (admittedly hilarious) ad was banned for its crudeness in 2001 but that hasn’t stopped it from garnering over 11 million views on YouTube since 2006! Foul-mouthed fun for all the family.

Pot Noodles are a snack beloved by many people who need to eat in a hurry or just have a taste for a savoury treat, but their self-promotion has left some people feeling a little salty.

In 2002, Pot Noodle declared themselves the ‘slag of snacks’ (British slang for a promiscuous woman) in an ad which depicted a scantily clad woman next to a Pot Noodle and asked the viewer: "Which would you prefer?"

One iteration of the ad showed a man abandoning his wife who would only make him sandwiches at home and searching a red light district for a Pot Noodle.

It was deemed that the word ‘slag’ was offensive to women and must be removed from the advert, while a doctored version could be shown but only after 9pm.

Zazoo condoms fail to protect themselves

A baby crying on a plane? A toddler running around a restaurant? A child that’s scared of the dark at the cinema? Who among us hasn’t looked at a distressed parent and thought "glad that’s not me!"?

Condom manufacturer Zazoo set out to depict that universally felt smugness in an advert for safe sex. Depicting the all too familiar scene of a toddler-tantrum in the aisles of a supermarket, Zazoo flashed up the sign "Use condoms" on the embarrassed father’s face.

The ad was released in Belgium and France and scandalised many. It was banned in 2006, possibly for being too painfully real for parents to watch.

In 2001, the only brand to have caused more couple and family arguments than Monopoly ran a ‘Tidy Up’ campaign - a series of ads which encouraged people to rethink storage solutions and clean up their homes.

The ad proved so electrifying that it triggered a slew of complaints, eventually being banned in its Scandinavian homeland of Sweden.

Not that this was the first time, as Ikea has an illustrious history of banned ads featuring mock erections and crossdressing. But a child holding a sex toy? Too far for most people.

Dacia drive up outrage with viewers

Romanian car manufacturer Dacia decided to cash-in on their heritage (by which we mean offensive stereotypes) with this ad that tells the story of a bourgeois British couple buying a car.

As the pair haggle with the car salesman, a round of insults is exchanged along with a wad of cash. The advert ends with the salesman taking the garments and watch of the husband in exchange for the vehicle, insulting him as he drives off. The final caption reads: "European top quality for a Romanian bargain."

The foul language and dodgy dealings proved a bit much for some motor lovers, and the advert was banned in the UK in 2011 for its offensive depiction of Romanian culture.